Walking with both girls home one day, we heard the ambulance first before we saw it rushing into our street. As a precaution, I told the girls to stop and let it pass before we proceed. They did that but they got long necks, watching where it would stop. 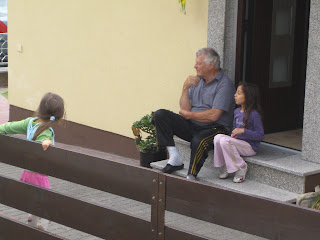 When it stopped a door away from our house, we heaved a sigh of relieve since Papa is in the house and tinkering at home. We thought it was the man next door. He was just released from the hospital a week ago and we saw him early this morning already mowing the lawn. He might just overdone it.

But nope, it was the wife who was rushed to the hospital. A mild heart attack. When the ambulance left, my husband came out and offered to drive the man to the hospital. He declined saying he's got enough of hospitals for now. But that his children would be going instead to their mom. My husband left him saying he should just ring us when he needed us.

The kids were concerned. They know that the man cannot cook alone. They know that he loves to eat. What would happen to him especially as he's still not well after an operation? I told them just continue being friendly to him. Greet him, say hello, ask how he is, and they could also ask if they could help him, too. But I told him the most important thing is for the man not to feel lonely and alone. He needs someone to talk to.

And know did they do? When the girls would see the man outside, they would go to him and talk to him. Look at this photo. They are also content simply sitting beside him and watching the neighborhood move.
Posted by raqgold at 23.6.09 3 comments:

We had a guest pet for three weeks. the bird drawn by Isabela
The bird named 'Nedula' is a surprise guest. We were saying goodbye to the family who's flying to the US for a vacation to visit the relatives when I noticed the bird.

The girls, who have always asked for a pet (and I have always answered we have enough fish in our pond), suggested that we take care of the bird. What else can I say?

We accepted the bird as a guest pet but the taking care part I delegated to the girls. They were the one who wanted the bird after all. We told them this is the right time to show us that they really deserve to have a pet at home.


The family showed us how to open the cage, how to give water and food and gave us the necessary items for the bird.


The first day, MC and IC wanted to invite their friends to show off their 'adopted' pet. We told them to take it easy, one by one. The whole day was spent simply watching the bird. The next day they told us to give more water and more food. The third and fourth was the same.


The fifth day? Papa said we need to change the sand in the cage. Who wants to go with him to buy a pack of sand for the bird? Nobody. He drove alone and changed the sand inside the cage alone. And that was it. 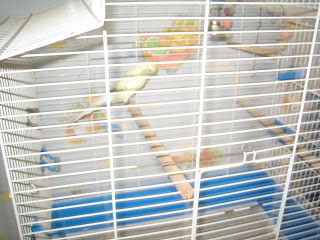 It took the girls only three days before the excitement on having a pet is gone. Oh, they managed to take a peek once in a while; would tell us if the bird needed more water or food. But on having a hand on the taking care part? No more.

When it was time to give the bird back, their interest were back. They wanted to have a bird, too. But it was too late, we have given them the verdict: No pets, even guest pets, for now. They know the responsibility of having a pet and they werent able to meet them.
They werent really disappointed, because as they said, we still have the pond full of fish. That's enough for now.
Posted by raqgold at 17.6.09 No comments: 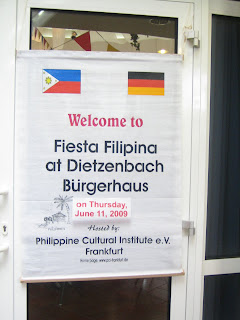 I have been living in Germany for almost nine years now but this is the first time that I attended a Philippine cultural festival.

A Filipina mommy blogger told me about it. She perked up my interestwhen she told me she wanted to buy food items and other things that she could stock at home. Meaning? Yes, there are those speeches and programs that my kids would find too long but there are more! There are stalls selling the homemade Philippine food, delicacies, balikbayan box services and native items such as the walis (broom). 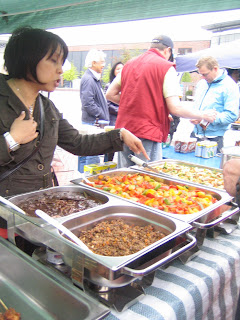 We went a bit earlier, well, I wanted to have my lunch there. Upon reaching the area, I could already smell the flavor of the Philippines. It made me think of nanay's (mother) cooking. My kids already know what they wanted to eat, the Philippine barbecue with rice. It took me a long while to decide. Such that I almost ended up tasting almost everything. It was all worth it though.

And what's more, they are also available for take home -- packed for the freezer and ready to be enjoyed at home when one misses home's flavor. I also bought some freshly made siopao (dumpling) which I served for breakfast the next day. My husband wanted to buy mangoes, too, but when we realized that they are not from the Philippines, he skipped. He wanted only the Philippine mangoes. 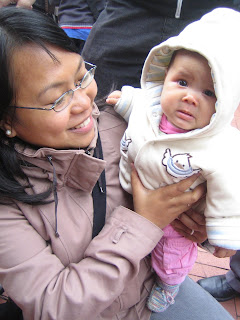 And of course, there you get to meet friends and be introduced to interesting people!

I love it that the kids were exposed to this festival. They love hopping from one stall to another and tasting the goodies. But I have to tell you this, gummi bears won over the delicacies :D
Posted by raqgold at 16.6.09 2 comments:

I dont want to play with your sister

I asked IC if she wanted to go with me to fetch her sister.

Reaching MC's playmate's house, I told IC if she wanted to, she can watch her sister and her friend playing. She eagerly said yes.

After awhile she came cuddling to me. Saying she only wanted to stay with me. And then when I asked her if she wanted to play she could go down again, she said I needed to go with her. Not knowing the reason...

It seems that the playmate of her sister doesnt want to play anymore as she doesnt want IC to play with them. How did I learn about it?

Because MC came and told us saying, 'we cannot play anymore because IC should not be here.' I had to hold IC in my arms when I heard about it. She seems cool about it. But I dont know what she really feels inside. So I simply said that IC only wanted to watch them play.

So before she would get really offended, we said goodbye. But not before IC hearing the girl complaining to her father that she doesnt want to play with IC.

I hurriedly brought the girls out, watching IC walking with bouncing steps. Both were giggling and playing all the way home. But I still wonder what IC feels.

I spoke to IC about what happened that night. I told her sometimes big girls dont really like to play with smaller girls anymore. They think that because you are smaller, you cannot play the way they do. That you would not understand what they are doing. But of course, you now better, right? 'Oh but that is our secret,' she added. And she gave me a hug.

I promised her I would make a playtime date with her chosen playmate next week. And she responded with enthusiasm.

We cannot always protect our kids from being hurt but at least we could explain and make them feel better.
Posted by raqgold at 15.6.09 1 comment:

My husband's a year older

But he looks and feels younger

Asked about this he would answer

His got a wife who gives tender loving care,

He gets a loadful of smile and hugs from his daughters.

I am proud to reach this age.

I am healthy and happy.

'Glück ist ein Problem. Das ist doch nicht Wahr,' ( Happiness is a problem, that is not true) that was what MC told me. She said she heard those words being uttered in a film.

She further explained that when somebody is happy then she's got no problem. I agreed with her.

Then she had second thoughts; saying that could be true, but only sometimes.

'Because once when I was so happy and excited once during class, I was not able to concentrate I almost did my lessons wrong,' she added.

I told her that it is okay to be happy, but happiness does not mean we should already take other things for granted. But I am glad she could relate those realization to everyday things.
Posted by raqgold at 2.6.09 4 comments: