Remember our trip to rescue girls from hell?

I met Lynn there.

She was sitting in one corner.
Tears flowing. Watching everything.
Hugging her newly-born child.

She's got a chance.

Are you really 18? She closed her eyes.

'Do you want to go home?' She stared.

Where do you live? She said Naga, Bicol.

How long have you been here? One year.

Do you want to go home? She cried and shook her head.

I wanted to bring her with us. Give her a chance; with her newborn child.

Lynn wont move. She is paralyzed with fear.

There were too many people around. Then a new face surfaced, a man came.

We must go. We left Lynn; and her newborn child.

I wanted to apologize to Lynn, to her newborn child; and to the other girls. But we could only do so much.

But there's good news. A few days after our trip to hell, they let Lynn and her newborn child go. But what about the other girls? This is not the end of it. I promise.
Posted by raqgold at 28.10.09 No comments:

You wouldnt know what kind of drama we are living these past days.

We missed sleep. We drove miles. We used up time supposedly scheduled for work and play. We spent our own money. We exerted effort; used charm or words when needed. We let tears flow. We might even have endangered ourselves.

But I am sure it is worth it.

Because we were able to rescue girls.

Girls who were victims of unscrupulous individuals.

Girls who were deceived into working for something horrible.

Girls who wont even have a chance to enjoy being girls!

Girls who could have ended being statistics.

Girls who have a future because they have families who love them.

Girls who could be our girls if those terrible elements of society wont be destroyed.

We just want you to know that what we did is definitely worth it; especially for our peace of mind.

We are still fighting that justice would be served. Please pray for us.
Posted by raqgold at 22.10.09 3 comments: 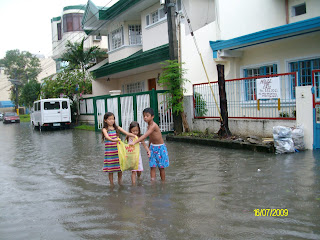 the kids' first adventure in floodwater
The Department of Health in the Philippines warns the public on leptospirosis after the floodings in Manila.

With the recent spate of flooding in the country, the cases of leptospirosis rises and this is a cause for concern.

I am ashamed to admit that I havent heard of 'leptospirosis' until a few months after arriving in Manila. The first time that the house we were renting got flooded (see photo above); we treated the flood as an adventure. I even let the kids play, collect trash floating around (my eldest told me the trash would prevent the water from receeding) and let them experience 'flood.'

And then when I was proudly showing the photos to friends; a doctor mentioned to me about leptospirosis. He said it is very dangerous to let people wad in floodwater because of this condition.

Leptospirosis is caused by swallowing the bacteria directly from water, absorbing it through cuts in the skin, or through food. Although the disease is commonly associated with rat urine, infection can also come from animals like cattle, pigs, horses, dogs, and wild animals. The bacteria live in freshwater and are killed immediately by heat, disinfectant, acids and alkalis.

The disease’s incubation period is seven to 12 days after exposure. Symptoms may appear suddenly as early as four days after exposure, or as late as 21 days. Common signs and symptoms are flu-like and include fever, a red skin rash and general weakness. Headaches, reaction to light, muscle and joint pains, vomiting, and fatigue are also common. Incubation period may last up to a month. Death may also occur.

Anyone with a history of wading in floodwaters and who has the symptoms of the disease should consult the nearest doctor or health facility for treatment immediately.

Other guidelines to prevent the disease are as follows:
- All drinking water should be brought to a rolling boil for at least five minutes and preferably up to 20 minutes.
- Fresh vegetables and fruits should be washed in clean water before cooking or peeling
- Use protective gears like rubber boots and gloves if you want to wade in floodwaters
- Make sure that all things (furnitures, appliances, etc) that were under floodwaters are thoroughly soaped and washed

The typhoons that damaged a part of the Philippines left a lot of people displaced: Now I am using my blog to let you know that there are many schools rendered 'useless' by the typhoon; thus there is the Adopt-a-School Program. There are more than 100 schools who need help such as notebooks, pens and pencils, papers, etc... Or you could email me for more information at die_erhards@yahoo.de

MANILA, Philippines — The Inquirer is publishing the list of Metro Manila public schools damaged by Tropical Storm “Ondoy.” The Inquirer hopes that benefactors will rush to help meet the urgent needs of these places of learning for the nation’s children.
Please adopt a school now. To find out how to do so, please contact Inquirer Learning editor Chelo Banal Formoso at 897-8808 to 09 local 399, (Sun) 0922-8182942, (Smart) 0918-3824061. Here are the list of schools: click
Posted by raqgold at 17.10.09 1 comment:

There were repairmen in the house this hot afternoon.

After their work, we offered them a pitcher of iced tea and some biscuits.

When MC chanced upon them snacking, she saw that it was the pack of biscuit that their Papa bought for them as a surprise gift when he left town a week before.

'Mama, how could you give that biscuit to those men? Papa told me the biscuits are for kids only,' she pointed out. Good thing she spoke in German because she told me off right in front of the repairmen!

And I explained to her that next time, if she wanted to say something like that, she could ask me to go to a private place with her. It is not good when other people would hear that they are not supposed to eat something that was already served to them.

She nodded. She went out and came back with a handful of the biscuits that she munched on. And she hurried to the kitchen, coming out with a bunch of bananas in her hand saying, 'I didnt get all the biscuits. But I am bringing bananas to the men so that they would have enough to eat.'
Posted by raqgold at 16.10.09 No comments:

Calming her down after a long and loud tantrum, I told my seven-year-old year MC that it would have been simplier if she told us first what she wanted; explained to us what she needed; expressed her thoughts -- before exploding in tears and screaming on everybody who would try to talk to her.

'You could always let us know first because we would not understand if you start crying,' I hugged her to me. 'We would listen to you and try to work it out.'

Her answer? 'I would not be satisfied because sometimes you wont agree to what I wanted,' she grinned.

Well, I explained to her that sometimes what she wanted isnt always good for her.
Posted by raqgold at 14.10.09 No comments:

What the flood taught us 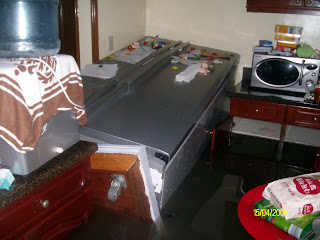 The girls tend to go back to the day of the big flood that damaged our house.

Everytime they pluck out their memories, I always ask them what the flood taught them; here are their list:

1. The floodwater is dirty; they should wash properly if they wadded in floodwater esp. as they saw different things floating around.

2. The rainwater is good, but too much rainwater is dangerous; especially to those living near body of water. Our former house is beside a creek.

3. When the floodwater receeds, the water and the mud left would be slippery.

4. Water leaves marks all over. Their swing and their toys were already washed but we could see the blemishes.

5. All things that were under water should be washed and soaped or else they would smell bad.

6. We should not cry over damaged things, they are only things and they could be replaced.

8. Big and heavy things do float and flips over. Just like our ref. (see photo above)

9. It was not good that mama was not there when it was happening; the most important thing is that we are together as a family.
Posted by raqgold at 7.10.09 2 comments:

What the girls need

It was unfortunate that I was not at home during the typhoon that damaged our house last week. My husband and the kids, together with a household help were alone during the time that they most needed me.

I heard how my husband's voice moved from panic into resignation. But I didnt know how the kids coped up during the time that they were witnessing the floodwater rising. I made sure that they were safe. Before I started saving the battery in my mobile phone by turning it off -- calling only every hour during the 15-hour that I was not with them. But I was only able to talk, once, with one of the girls.

When I got home, they were already sleeping; all three, in our bed. My husband woke up and told me he simply told the girls that this is just like a camping adventure; especially since they needed to cut off the electricity to prevent any accidents.

Since my husband and our help, had to try to save some of our things; nobody came to them. And I wasnt there. Although my husband called up to them that they are somewhere around the house, the reassurance of a presence were missed by the girls. Although both of them eventually calmed down to play, I couldnt imagine what was running on their minds during those times of need.

It pained me when MC started crying bitterly, during breakfast the next day. She simply wont stop and she kept on saying over and over 'it is not good to stay here in the Philippines. I thought is is nice here. But I dont want to stay here anymore.' She kept on repeating the same phrase.

She was sobbing hysterically before we managed to calm her down.

I know it would take sometime before the girls would feel comfortable again everytime there's heavy rain.

But we tried to give them back their feeling of security, to reassure them by doing these things:
- By going out of the house. We decided to eat breakfast outside and leave the damaged house behind.
- By bringing them to a new environment. We also booked a hotel and told them we are going on a short vacation
- By giving them our extra attention. We didnt leave the hotel, instead, we spent the whole day just relaxing, just being together.
- By telling them something they want to hear. We told them we are going to look for a new house. They loved hearing that as they dont want to go back to the old one.- By asking their approval in choosing another house. They were proud that they are allowed to help decide on our 'new house.'
- By keeping them busy. Playing, homeworks, etc.
- By explaining to them what happened and that not every rain means the same amount of floodwaters.
- By giving them extra hugs and kisses.

Things are getting better. We found a house. We are enjoying our hotel vacation. Most of all, we are together.

I confess, I needed reassurance during this past week, too. And I got them from friends all over the world. You know who you are, thanks a lot!
Posted by raqgold at 3.10.09 2 comments: