DIY: From a Skirt into a Halloween Treats Bag

Because she's wearing a newly-made bat costume, IC decided that her ever reliable Halloween bag would not do anymore. She wanted a new Halloween treats bag.
Busy, busy Halloween. I know why, because it falls in the same week as the kid's autumn break!

Anyway, if there's a will, there's a way; especially when IC asked so sweetly.

A confession: there's this skirt I have already set aside because I wanted to make a bag out of it. I have decided it would do for IC's Halloween treats bag.

DIY: From an Umbrella into a Kiddie Bat Costume

I have actually been planning on creating a kiddie bat costume for my girls since I saw a photo of a bat costume using an umbrella a few months ago. Why? Because I have a broken black and silver umbrella that would fit the bat costume!

The mummy costume was easier because I have all materials ready, though.
But it took me a long, lone time to finish the bat costume because I don't have the proper materials to work on the umbrella spines as suggested here. It was only when I presented the bat costume idea to IC that I really gave enough thought for an alternative. So here goes, presenting my own version of a kiddie bat costume made from an umbrella.

Materials needed for a bat costume made from an umbrella:
an old black umbrella
a black hoodie
pins
barbecue sticks
a pair of scissors
thread and needles

This is a result of another last minute request from the girls: 'Mama, we need a new costume for Halloween!'

Mama needs to think fast and work on the costume faster. Therefore, a mummy costume. I think it's easy and yes, it was done after 30 minutes. It helped that I already have all the materials ready for the mummy costume.

It also helped that I used a very old table cloth I retrieved from the store room, therefore I don't need to dye the fabric to create a seemingly-authentic mummy-look.

Materials needed for the mummy costume: 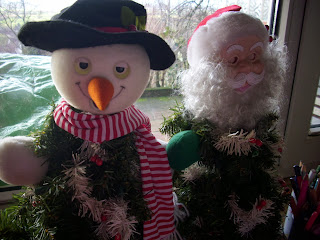 It’s only October but I am already prepping up for Christmas. Why? Because December is the busiest month for me.  (I know, December might be the busiest for all of us, but let me continue so you would understand how specially overwhelming December is for me.)
In Germany where we live, December does not only mean Christmas but also the celebration of  the traditional St. Nikolaus Day on December 6. Add to this my daughter’s birthday which falls on December 10, another big celebration. Those are not all.  Do you know that Germans consider the 26th of December the second day of Christmas, too?
Read more here.

I normally don't approve of food being wasted. But one crazy night last week, a food fight started after a dinner of mashed potato and sauerkraut.

It began when the girls started teasing their Papa that his left cheek is smeared with a piece of sauerkraut. Instead of helping him remove it easily, the girls just laugh at his attempt to clean his face.

He teasingly attempted to smear the piece of sauerkraut on the girls faces. By then, the girls were already running screaming around the dining room. That's when I pretended to scoop some mashed potato to toss to them.

But MC was faster, she dipped a finger in the left-over bowl of mashed potato and smeared it on her Papa's face and declared giggling, "I have always dreamed of experiencing a food fight!"

I guess, most of all have dreamed of having a real food fight and thus, the real food fight started. Still seated, I also dipped my finger inside the mashed potato bowl and smeared it on my husband's face. IC meanwhile sneaked beside me, dipped her fingers on the same bowl and gave her Papa another face dirt. Because he was laughing so hard, he thought he could escape the ladies' power by running into the kitchen.

How to Ripen Green Tomatoes

Are you still waiting for your green tomatoes to ripen? We are.

It's October and it's colder. We wanted to save our green tomatoes! We have to do something. 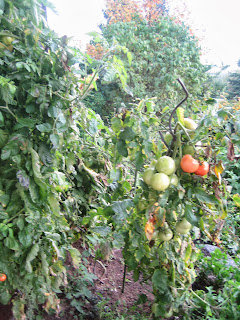 
These past weeks, I have been serving rucola (arugula) salad at meal times. Last week, I discovered our Feldsalat (Lamb's Lettuce or Corn Salad) corner is thriving.

My husband decided to keep the snails from invading the lamb's lettuce corner by placing a plastic wall. It was effective and I could see that we would be harvesting a load of lamb's lettuce this year. Good thing because it is the girls' favorite salad!

I am also glad that we could still harvest tomatoes from our backyard garden. Greens and reds for a great side dish, yes!

Preparing to Turn Our Pet into a Therapy Dog

We have been playing with the idea of training Rikki as a therapy dog when we learned that her mother and older brother were both working therapy dogs. That was a few weeks after bringing her home in 2011.

After which, we learned that her twin brother (I call him her twin brother because their mother had only two litters), was also adopted by a special child with special needs. Lennie (Rikki's twin)  is being trained as a therapy/companion dog, too.

We have not stopped contemplating about the idea. Actually, the whole family was keen on turning our pet into a therapy dog but when I talked to somebody knowledgeable, she recommended that we enjoy our time with Rikki first. So, we did!

A Short Hike to Celebrate the German Unity Day (in photos)

Today is the Day of German Unity (Tag der Deutschen Einheit), a national holiday in Germany celebrating the anniversary of German reunification in 1990.
Since the holiday was on a Thursday, the school declared Friday a holiday, too -- a long weekend! What to do?
We took advantage of the sunshine and decided to go for a short hike. The girls were not too fond of the idea but they went with us after telling them we could also collect walnuts, hazelnuts, chestnuts, etc. along the way.

We are enjoying our harvests and there are more to come...