DIY: From an Umbrella into a Kiddie Bat Costume

I have actually been planning on creating a kiddie bat costume for my girls since I saw a photo of a bat costume using an umbrella a few months ago. Why? Because I have a broken black and silver umbrella that would fit the bat costume!

The mummy costume was easier because I have all materials ready, though.
But it took me a long, lone time to finish the bat costume because I don't have the proper materials to work on the umbrella spines as suggested here. It was only when I presented the bat costume idea to IC that I really gave enough thought for an alternative. So here goes, presenting my own version of a kiddie bat costume made from an umbrella.

Materials needed for a bat costume made from an umbrella:
an old black umbrella
a black hoodie
pins
barbecue sticks
a pair of scissors
thread and needles

How to create the bat costume:

1. Unscrew the top cap of the umbrella. 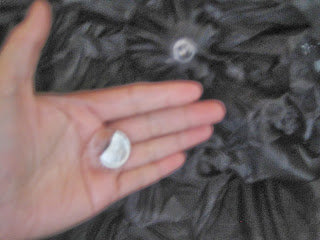 2. Remove the umbrella spines by using a pair of scissors to cut the thread around them. Leave the cap on the edge of the spines. 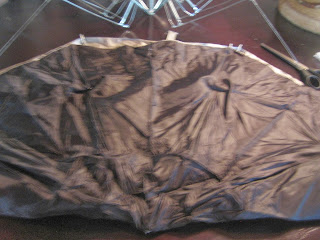 4. Place barbecue sticks in the area where the umbrella spines used to be. I needed two so I had to sew them together. Sew them inside out so the cloth would protect them from moving.


5. Then measure the wing span needed for the hoodie's sleeves and fix it using pins.

7. Cut out ears (I used scraps of umbrella cloth) and sew them on the hood.


The kiddie bat costume made from umbrella is done!