What happened was this...
They were biking. MC on her own. IC was hanging on to her babysitter's back.

Then it happened. IC's right foot got stuck, in the tire.

They all panicked. IC was crying for dear life; while MC and their two babysitters were screaming for help.

Then this version: according to their babysitters, MC stopped them from calling for me because if we know of what happened, I would be angry.

So when MC called for me, I already saw our driver (the father of the babysitters); running back to the house in panic. That made me move faster.

I saw IC lying on the street, sorrounded by onlookers of mixed adults and kids.

Oh my baby's in agony. There seemed to be no way out but to cut the spacers in the tire.

A neighbor brought an industrial scissor and my husband cut the spacers.

In a second, IC's foot was freed. I had to carry her, at the same time, praying that there's no damage on her ankle. There's cold compress, TLC and sweets afterwards. And loads of TV watching.

Those were our homemade remedies. After a few hours, she was walking normally again. Great!

As for MC, I told her that no matter what, tell us. Especially if it's an emergency. We would be angrier if we didn't know and they are hurt.

After the storm: Brown-out. No water. No phones. No internet. No television. Not even a radio!

Boring! The girls were shouting the word every few seconds a few hours after the storm left our area.

But I also saw, they were curious. It is their first time to experience a power outage this long.

They tried turning on light switches; sneakily pressing the remote control for the television.
Warned about water shortage, they took to washing or quick showers.
Bored because of the silence, they lined-up all their battery-operated toys that make sounds; and pressed them randomly.

And of course, the cries of 'what could we do? Boring!' continued.

Oh but I did a few things, too. I had to drive in the dark to find drinking water suppliers that are still operating. Good thing there were a few with generators so we found enough. I tried finding enough battery for our radio to listen for the news, sadly, there were no more batteries in the size I needed, available in the stores that are still open.

So, we dont even know what is happening in other parts of the world! (I called my parent's house early morning and they were ok but with the same situation).

I had to turn-off my mobile phone to save power. Since we dont even have a radio to monitor the news, I sent sms to some friends and they informed me that it might take 2-3 days before everything would return to normal!

I told the whole family. I again turned-off my mobile phone. We took quick showers. Prepared the candles and matches. And braced ourselves for the next day.

Of course, I am thankful that nothing happened to us. And that is the most important thing!
Posted by raqgold at 25.7.10 3 comments:

Watching the eye of the storm

The weatherman said the first typhoon (the Philippines would be hit by an average of 20 typhoons within a year); would be just passing through the border of Manila where we live.

School has been canceled for the next day. We took some of our things in the garden to a more secured place.

Then we got ready for bed. Then at around 11 pm, our puppy started making noise; followed by our birds. A few minutes after that, the wind!

I really thought there's a tornado passing by! My husband and I decided to bring the animals inside.

MC woke up and I told her if she is not sleepy, we could watch the eye of the storm. She forgot about bed and started running around the house. Checking the dog, the birds -- but the most exciting thing for her is to watch the swaying of the trees outside, to hear the howling of the wind, to guess what kind of items kept falling and clattering outside; to check out again and again our windows and doors; and to just feel the storm passing by.

In fact, instead of keeping all windows closed; we left one side open so we could feel the wind and the rain! Of course, I told her not to put her face directly on the window to avoid being hit. We tried to wake IC up, but she's deep asleep. I am sure she wouldnt want to miss this, too. (In the morning, when she learned about it, IC was disappointed!)

And then, a few minutes of watching the storm; the power outage! Brown-out! Instead of being frightened, it added excitement. She knew where to find the flashlights, even! I didnt know I have a girl scout in our midst :D

MC and I stayed up in silence, cuddling while watching the storm raging outside. It was a different bonding experience, watching the eye of the storm.

Somethings to remember though:
1. Never go out in the dark until the storm has calmed down
2. Make sure all the windows and doors are closed
3. Remove all delicate things along the window sills; and start checking what should be stored inside before the storm
4. Make sure your mobile phones have enough power; if not, then turn it off until needed
5. Store enough water
6. Keep flashlights, candles and matches within reach
7. Avoid walking around in the dark and watch out for those wet patches that could get slippery, especially around windows that was left open
8. Keep calm
Posted by raqgold at 15.7.10 No comments:

Twice, in more than a month actually.

The first time, my husband and I woke up at around 2 am because the neigborhood dogs were barking in frenzy; which doesnt normally happen. My husband looked out of our window, facing the street, and he saw someone jumping from the empty lot beside our house. He went down and checked, there were no disturbances within our perimeter; so we went back to sleep.

We reported the incident in the morning and were told that we should call the security guard on duty on that same hour that it happened.

The next time last week; our housemaid was surprised to see a dress which was supposed to be hanging at the back -- lying in the front gate. That was when she noticed that the front gate was wide open. And when she went around the house, she saw evidence that somebody attempted to get into our house.

By that time, I was already up and she called me in a voice filled with fright. I saw that the screen in one of the windows were already damaged and that they used my Nordic walking stick, to lift the wooden lock in our sliding door! I think they were disturbed by something or someone because they flee.

I woke my husband before I went to the security guard to report the incident. And to my surprise, I also saw a police car roaming around! It turned out that another house, in the next street; were ransacked early morning. All their important belongings were taken; the good thing is that nobody from the family woke up thus nobody was hurt.

Police investigators came and went into our house. We informed our girls on what happened. We showed them the damages and explained to them the implications. They were alarmed, but a little excited seeing the policemen going in and out.

But we also told them, that from now on; we would have important changes imposed.

- Double checking on the doors and windows before sleeping
- Regularly checking that all windows and doors are functioning properly, meaning we could close them tightly
- Never inform anyone that you are alone at home
- Always leave certain outdoor places well-lighted
- Keep important telephone numbers within reach (now we have them plastered in the living room, in the kitchen, in all the bedrooms)
- We bought a dog!

In our neighborhood, we also talked to the homeowner's association which agreed about the following:
- unscheduled early morning walks together (just a phone call a day or two to inform them)
- an extra guard at night that would roam around
- a fund raising campaign to buy CCTV cameras
- exchanging phone numbers
- immediate reports when someone noticed something dubious
- be more aware of each other's guard dogs' disturbances at night and early morning
- regular perimeter checking, to immediately report damaged fences

You could see the group effort and the spirit of volunterism in our small community. That may not be enough to completely stop the crime, but with our same goal to keep our village safe -- we have started to form friendship.
Posted by raqgold at 12.7.10 No comments:

Mama, Please stay the way you are

'Mama, you celebrated your birthday a few weeks ago, does that mean you are getting older?,' asked IC.

And she pleaded, 'but I wanted you to stay the way you are!'

You know what, age doesnt matter.

That is just to keep track of the years; of the numbers.

But when it comes to me being a mama to you; I am not getting older.

I am just gaining years of experience. I am just adding more knowledge on how to be a mama.

I would stay the way I am; but I need to grow; as you grow, too.

But this is absolutely true: I would stay the way I am, true to being a mama to you and your sister.

And I would accept it, too; when there is a need to change. Just because both of you have changed, too.

We have to move on, you would know that, in the future!

For now, let me love you the way you want to be loved! And more.
Posted by raqgold at 8.7.10 No comments: 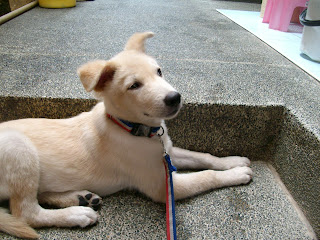 Why did we agree to finally buy a dog?

Well, after two break-in attempts in our house, I guess, we really have to do something, right?

The best bodyguard would still be a dog!

IC wouldnt want to know anything about buying a dog. She simply refuses to even talk about it.

MC is very enthusiastic; and in fact, has agreed to take care of the dog. From waking up early for a walk; until before bedtime activities. She has proved, with the birds, that she could already take a responsibility seriously; so we agreed.

But... IC should also agree.

We drove to the pet store. IC wont go; and when she did, was very reluctant. In fact, arriving at the pet store; she decided, nothing looks good. So she point blank refused to even look around. Actually, I had to carry her because she's so afraid of the different pets around her.

Meanwhile, MC cant contain her excitement. She found one; and she wont let go.

Trying to get IC to be a part of the decision-making was hard. Until we talked about the name of the dog.

Anyway, because we wanted to feel secure at home; we got Candy.

And because we got Candy, IC, who used to hate dogs; seems to be changing her mind. She has started petting Candy.

As for MC, she's taken her responsibility to heart. Waking up at 6 am, because she heard the dog barking and as she said 'it might be hungry!'.

I am glad to have Candy. For our security and for the kids to learn to be more responsible.
Posted by raqgold at 4.7.10 No comments: