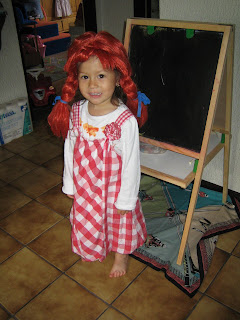 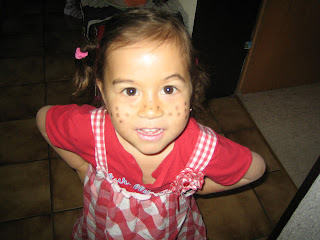 (Photo: Pippi for a day)

Isabela is, at this time, so crazy over Pippi Longstocking (a character of a little girl with fiery red hair worn in braids that are so tightly wound that they stick out sideways from her head).

I crammed to create a Pippi Longstocking birthday party for her. I browsed in the net and printed dozens of Pippi photos. I tacked them around the house. I piled them up as flags. I tied them in balloons.

Then I baked brownies which I turned into a Pippi cake by adding worm gummi candies for the braids and the mouth and the eyebrows. And pinched egg chocos for the eyes. She's happy with it. Though she and her sister almost ate up the dough before I rescued the cake by putting it in the oven. Kahit na di pa dapat!

And then on her birthday, she run around wearing a Pippi costume complete with a wig and freckles. We had to shop a bit in the morning. So most of the people who saw her just had to take a second look. She was a hit! Most people smiled. Others cant help but exclaim, 'how sweet.' The elderly just had to talk to her. Other moms pointed her out to their kids. The kids just stared and stared. And we just let her enjoy it.

She lived her dream. To be a Pippi Lam (she still cant pronounce Langstrumpf (German version of Longstocking) on her birthday.