Our Pet Trains as Rescue Dog 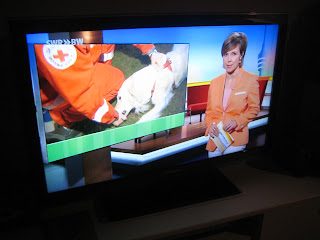 Who would have thought?

Our golden retriever, Rikki, passed the first hurdle to become a rescue dog! And I am grateful that a television crew was present during the try-outs, too.

I would have joined them, but the girls were sick the whole of last week and I was also not feeling well.

I had to prepare all the possible things they would need: a bottle of drinking water for my husband and for Rikki: enough treats, some of her favorite toys, and a bowl filled with water.

Before they left, I jokingly told Rikki to take some photos during the training :-)

What a pleasant surprise that when they got back home more than two hours later, my husband informed me that there's a camera crew during the training that night! Nope, he was not sure if their segment would air, but we could check it out the following day.

Of course, we spent the rest of the night asking them how they both survived the rescue training. We have so many questions, we could not even wait for the answers! Those answers we would also see later during the airing of the program.

Rikki's mother is a successful therapy dog. We have played with the thoughts of our pet becoming a therapy dog, too, especially when we noticed how she reacted when meeting special people. She seemed calmer with them, but... the seminars mean we would have be away from home at least two weeks. Too much for our family.
Then a beautiful alternative in cooperation with Red Cross, rescue dogs! The main training area is located a few minutes drive away from home. The other training places are also not too far away. The training schedule is something we could work with. And most important, our dog seemed to enjoy it! Good thing she's still young enough to be considered!

Anyway, it would involve hardwork and dedication. Some expenses. A lot of time. And the family's support.

The girls are enthusiastic about Rikki becoming a rescue dog. In fact, next week, we have been invited to join the training. We would be there, too!
Posted by raqgold at 7.3.13