Here's a short cut of our three-day stay in Bangkok.

After a 10 hour flight, the chance to get out of the plane was really urgent! As the kids were still too sleepy, we were the last one out of the plane, though. It was our first time at the new Bangkok airport, I cant remember the name as it is too long and too complicated. As the airport itself, or am I just too attached to the old and familiar one? Maybe. 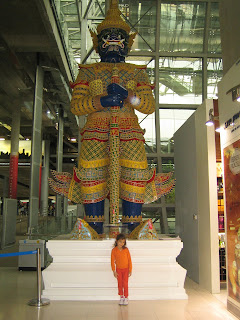 This photo's taken at the new airport. 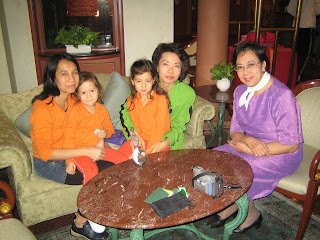 The first people I met with, (see photo) my former officemates at the Evergreen Laurel Hotel in Bangkok. (I was working in Thailand for five years, not in the same place though) My boss, Khun Jenny (in green), who always gives special rates to us not to mention the other freebies :D and Khun Cristina, a Filipina who's married to a Thai and who I admire because she can read and write the Thai script! Not so easy. I tried to learn by myself but I only got into writing when Deutschland called me. Though I did learn how to write my name and read the Thai script of Silom where I used to live because I need to know how to find my way home after office, right? 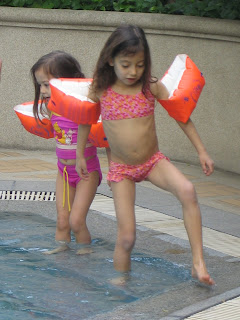 And the first thing we did upon arrival? Swimming! 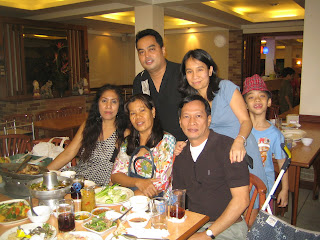 I also met with some Filipino friends in a Thai seafood restaurant. What was amazing was that they brought in some North Thai food and even sneaked in homemade Filipino food. My husband could only shake his head especially when they even started asking for extra plates to put on their sneaked-in food (plus the plastic bags needed to bring out the rest of the uneaten food). As for me, that's just another curious part of life, hahaha. 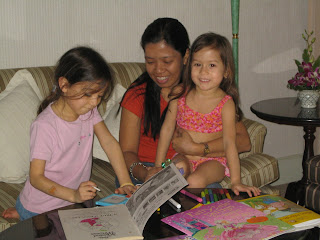 This is Tita Beth, with the kids, (see photo) a classmate from UST, who got enough courage to fly to Bangkok and start a career just because I urged her to try it. That was in 2001. And you know what, she's now driving her own brand new car and is planning to buy her own condo unit in Bangkok. Not bad, right?

It was due to Tita Beth that MC realized how hard it is to say goodbye. When she learned that we would be leaving for Manila the next day and that Tita Beth would have to stay in Bangkok, MC cried and she run in the bedroom to hide her sadness. We left her for a few minutes before going to her side. Tita Beth gave her a hug and assured her we would see her again. That calmed her. 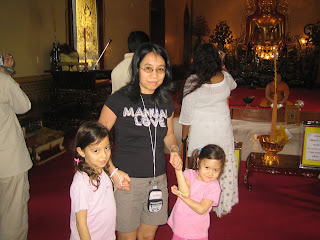 Because the kids were always up at 4 am during our time in Bangkok, and since we were still so disoriented with the time difference; one day we hopped in a taxi and asked to be brought to onf of the shopping centers, Mabongkrong (MBK). The taxi driver was so confused he asked me again where we wanted to go. I spoke to him in Pasa Thai (yup, I could still remember the basic phrases) to make sure we understand each other. And then he explained that the shopping center all over town would be open in two hours yet! See how we lost our sense of time. He told us we could bring us instead to the Temple of the Golden Buddha and we agreed. I am glad our driver thoughtfully asked though, or else we would be standing in front of a closed mall.

The above photo is taken inside the Temple of the Golden Buddha. At first, I was hesitant to go inside because normally, mini skirts and shorts are verboten inside. But my husband told me a lot of Thai and foreign tourists were inside wearing such things. So I did and we got those lucky bracelets from the monk which we are still wearing until now.

And yeah, we got to shop. Here are the list of Bangkok shops. 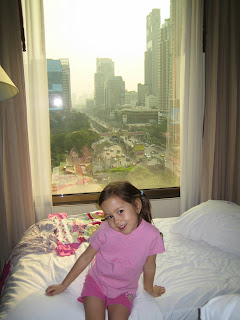 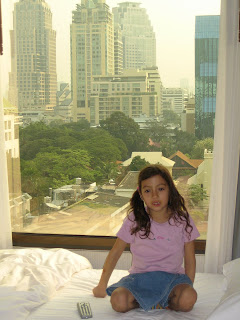 Here's photos of our hotel suite. We've got two extra beds for the kids and they were placed right in front of the panoramic windows. My husband checked on the sturdiness of the glass, of course, he just cant help it.

I love the view. I could even see the old apartment house where I used to live while working in the hotel. What's more, you could see, hear and feel the real Bangkok from up here. The big buildings and the honking of vehicles and the walking tourists sometimes until 3 am. I didnt get much sleep when I was in Bangkok, I savored the scene from up there.

On our last day, I finally asked the owner of one bookstore and he/she (I dont really know coz she looks so lovely and he because the voice is a bit doubtful and such encounters make Bangkok more colorful) if there's such books available and I got a tearful explanation: 'those books were his bestsellers but now they are completely verboten in Thailand.' Oh well...
----

Check out PMN: Travel on Megamom's tips as a traveling mom and PMN: Home and Garden on greymom's version of a dish garden.

Your children are such happy adventurous campers. You really do a great job.

About the picture in the Thai restaurant. There is a lady who is seated, the one right in the middle. She looks SO familiar.

Haven't been there yet, isn't it expensive ? Wow, I would definitely have the same view :D ! GANDA, sarap talaga mag travel.

thanks for sharing, raq

Hi there! I was quite excited when I found out that you worked in Bangkok before, when I saw this blog I was crossing my fingers that you'd still be here. Yun pala you just came for a short visit! Anyways, looked like you guys had a lot of fun here!

IA -- thanks for visiting my blog. we did had fun in bangkok. bangkok is a fun place talaga. there are still a lot of pinoys working there. are you based in bangkok or do you plan to go there?

Heard from friend that this is a great blog.