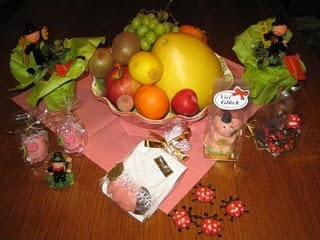 In 2009, the dream of spending New Year’s Eve on the beach was realized. It was something to watch the fireworks along the shore while a big band, a long buffet table and the resort people entertains us.

This year, we are back into our mixture of Philippine-German New Year’s Eve rituals.

But first I have an inspiration and decided to add another ritual early this morning. Since the girls are old enough to hold responsibilities at home; I told them that we need to tidy up and clean our house before the year ends because that would mean a clean and tidy house all year round -- although both of them mumbled and told me 'you dont have to repeat that.' I saw that they have started sorting out their things and have cleaned up their corners, even though they are still in their pajamas! Arent I clever?

Then girls gave me suggestions on what kind of rounded fruits they wanted to have on our table. But first, I have to answer this, ‘why do we need only the rounded ones?’

I informed them that in the Philippines, rounded fruits are always on the table when the New Year comes because they are supposed to bring good fortune. As is wearing clothes with that are dotted or with circular patterns, loading pockets and wallets with coins, creating loud noises (that would include the fireworks), leaving doors and windows open to let good fortunes in, and if you wish to grow taller – start jumping when the clock strikes midnight. Plus, it is always best to have the whole family at home because it would mean keeping the family one the whole year through.

In Germany, the rituals woes good fortune, too.

Although the Opa is not here anymore to bring us the giant pretzel, the chimney sweeper figures, the clover plants, the lady bug chocolates and the marzipan pigs; my husband and I decided to continue the tradition.

Of course, we might watch the comedy skit Dinner for One when and if the girls would allow us. And we have already lined up some table fireworks and the much awaited Bleigissen, the kits could be brought in most stores; the ritual which is done when a candle is lit and small chunks of lead are melted in a spoon held over the candle. The molten lead is then quickly poured into a bucket of cold water where it hardens and a form would be determined. The shape of the lead would determine the future of the person for the year to come.

Our sparkling wine is being chilled out in the snow. Though we wont have the traditional fondue or raclette, there would be finger foods, cold (sparkling wine, liquor) and warm drinks (glühwein, cacao and tea) to keep us up and awake until midnight!

As usual, we would try to take a nap with the girls; but if not, we would let them sleep until late and would shake them awake a few minutes before midnight.

Wishing everybody a Happy New Year!
Posted by raqgold at 31.12.10