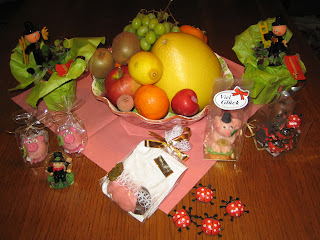 The Philippine tradition would focus mostly on wearing and having things that would bring us luck and 'gold'. There's the wearing of clothes that are circular in pattern or dotted, collecting at least 12 different rounded fruits that would be displayed on the kitchen table; having loads of coins in your pockets, making loud noises (we usually have our pots and pans for this) and spending money on firecrackers, and opening all the doors and windows to invite more good fortune (not really done anymore as it invites the crooks!); and I did this more than once, I jumped when the clock striked midnight, hoping it would help me grow taller :D

And we are not allowed to leave the house until the celebration, as staying together during the New Year's eve would also mean a closer family ties.

In Germany, the rituals are more or less the same -- for luck and 'gold' except they are represented by other things.

We exchange good luck charms from people close to us: the opa would normally provide a giant pretzel for the kids and he would usually add pigs made of marzipan and a bunch of clover plants or donuts decorated with a figure of the chimney sweeper. And I add some ladybugs chocos for more luck! 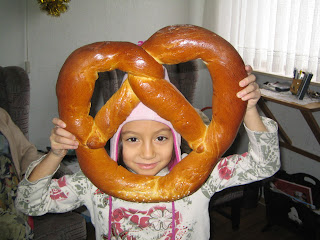 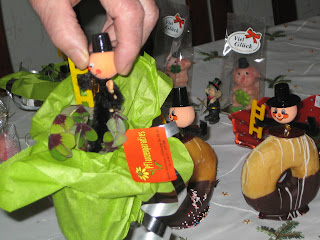 the giant pretzel (above) and the chimney sweeper figures on the clover
plants and on the donuts
As in the Philippines, most family stays at home to celebrate the coming of the New Year. There would be champagne or sekt and usually, fondue or Raclette on the table. The whole family would gather in front of the televion to watch a comedy skit, Dinner for One. 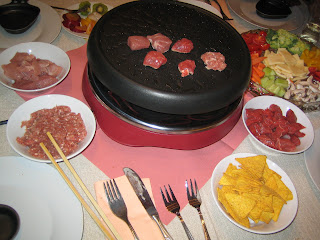 our raclette last year
There would be some fireworks first the table fireworks where the kids get surprises from confetti 'bombs' and then those done on the streets. 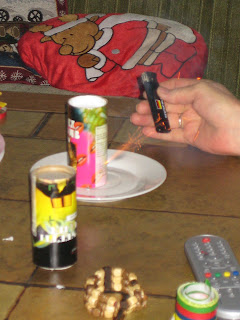 the table firework
Plus, the German Custom of Bleigiessen:

A candle is lit, and small chunks of lead are melted in a spoon held over the candle. Because of the low melting temperature of lead, this process does not take long. The molten lead is then quickly poured from the spoon into a bucket of cold water, where it hardens almost immediately. Each person tries to determine what he or she "sees" in the hardened lead figure, much like children see sheep, etc. in fluffy clouds. Often the lead figure is held up to a candle or other light, and the shape of the shadow it casts aids in this important decision. The shape of the lead determines the future of that person for the year to come. Nowadays, Silvesterblei sets can be purchased in most department stores in Germany. These kits come complete with lead figures, a spoon, and a list of possible shapes and their meanings.
A Blessed New Year to All!

That pretzel is HUGE!

The fusion of Philippine and German traditions is a wonderful idea. It's an enriching experience for the kids.

I've never seen a pretzel as big as that. Those pigs and ladybugs are so cute. The chimney sweeper figures are interesting.

Happy New Year to you and your family. Wishing you all the best in 2009.