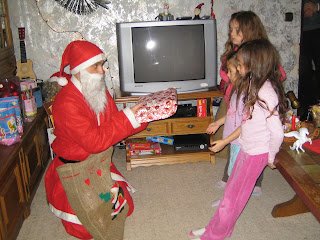 December 6 is the St. Nicholas Day in Germany. Traditionally, the day when Santa Claus comes to town.

At first, the kids kept on saying that Santa is only Uncle Ossi (he used to do the role when they were smaller); they believe that the real one could only be found in the North Pole.

But then we attended a Christmas party last Friday night where they met another Santa. 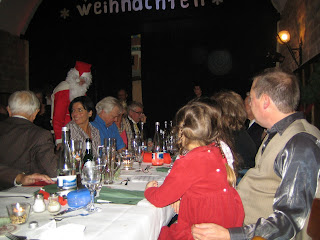 Here is Santa arriving. The kids watched in fascination. 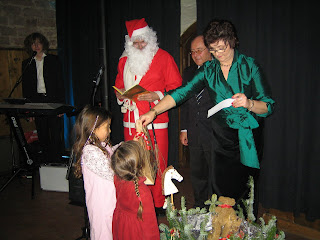 Since they were the only kids among the adults, they got special gifts and a chance to go up the stage to Santa.

Later, when they introduced the man who played, MC looked a bit disappointed but then she said she wanted to say 'Thank' to 'Santa' who is now in normal clothes.

MC told me then that Santa needs helpers because he couldnt be in all places at the same time. Thus, someone needs to dress up like him to help out.

And now we come to our St. Nicholas Day Santa. We celebrated at home. The kids know that he would be coming at 5 pm so they wanted to stay outside and wait for him; but they got got busy playing and forgot about him.

When the clock striked five, they heard bells and the loud 'ho, ho, ho'. They jumped excitedly and greeted Santa with glee. 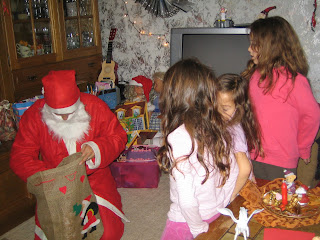 Santa talked to the kids first. He told them about their achievements this year and asked them if they could improve somethings, too. We usually give the one who would be playing Santa a list of things beforehand.

Well, the girls, as expected, promised to be good. After all, Santa's sacks are full :D And they enjoyed the night as we adults, enjoyed it, too. I do still believe in the magic that Santa brings.


Here is one website dedicated to Nicholas that states:

The true story of Santa Claus begins with Nicholas, who was born during the third century in the village of Patara. At the time the area was Greek and is now on the southern coast of Turkey. His wealthy parents, who raised him to be a devout Christian, died in an epidemic while Nicholas was still young. Obeying Jesus' words to "sell what you own and give the money to the poor," Nicholas used his whole inheritance to assist the needy, the sick, and the suffering. He dedicated his life to serving God and was made Bishop of Myra while still a young man. Bishop Nicholas became known throughout the land for his generosity to the those in need, his love for children, and his concern for sailors and ships.