Look Who's Busy in the Kitchen 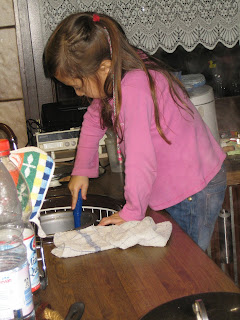 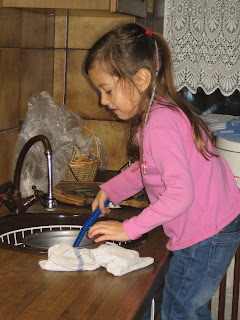 IC is busy in the kitchen

Whenever people ask her how old she is, she would always add a year.

Saying she's five years old. IC wanted to be as grown up as she sees her big sister to be.

In fact, she's trying very hard to act more grown up. She would really make herself busy with her own 'homeworks', her type of toys and games have been upgraded (no more Winnie d' Poohs), but she is really happyily grown up when she is with us helping in the kitchen.

There is only one thing she wont do. She would run with loads of excuses when it is time to tidy up ;D

And even though it would take more time with her on our side while cooking or baking, we accept her presence. After all, it is better to encourage them.

Here are some tips on how to survive in the kitchen with your kids:
- The most important things: ask them to wash their hands and put on an apron and warn them that the oven would be hot.
- If it is baking time, give them a small bowl to mix, too. You could mix the whole thing later. I do this to have more space to work.
- Ask them to form the cookies and to decorate them. They love these things most.
- And when it is baked, they could take the finished products out of the oven. Another exciting thing to do for them, but make sure they have thick pan handles and that you closely supervise them.
- When it is cooking time, I ask them to cut some veggies for me by giving them their own kiddie knife. They would feel very proud of it, really.
- They are allowed to put the ingredients in the pan/pots, too. As long as they put them carefully, slowly but surely.
- They could even stir, as long as they do it carefully. I usually show them how to do it first.
- And of course, they are allowed the first taste.

I encourage them to stick around to tidy up. Starting with clearing up and into the dishwasher. Because as I tell them, it is also a part of baking and cooking. I am not always successful but sometimes, they do stick around to help.
Posted by raqgold at 20.12.08

Just look at her hair. Lovely!

Brava bambina IC! Keep it up!

I know what you mean. Yohan just loves helping his Dad bake but when it's time to cleaning up, he would come up with so many excuses.