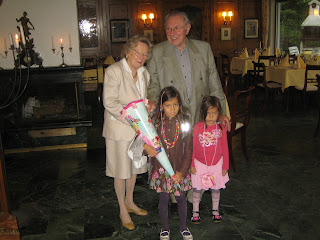 our last photo with oma, during MC's first school day

Oma would have been 86 years old today. If she didnt joined the angels last October.

I know that oma had a graceful life. She was the daughter of a soldier who is good with his hands and a factory worker. She met opa (grandpa) right after the war broke out. During a dance party and she decided immediately that he would be his for the rest of their lives.

Oma captured opa's heart. Why not? She's beautiful and she would remain beautiful til old age. She aged gracefully.

I always admired her gentleness. I am glad that the girls got to enjoy being with oma even for a few years, I hope they would remember her with good memories.

Oma would always secretly slice bread and give them margarine with it; even though they've just eaten. Oma would eat the 'forbidden' pralines with them. Oma would always find cookies hidden in every nook at corners of the house for them.

Oma would give them permission to pick flowers from her garden. Oma supervises with watering the plants despite the fact that the pots' and the garden are overflowing already. Oma didnt throw nor gave away the old toys of their papa; thus they even play with them after more than 50 years. Oma let them try on her fur coats and accessories; even her jewelries. Oma allowed them to parade around with her clothes and shoes.

Oma would cook her own version of the spaghetti with her special krakale (croutons). Oma would slice a piece of cake and wont bother about the crumbs left all over the house. Oma would play games with them even though she couldnt really move so fast anymore. Oma would dream with them, too.

I could remember those things because I used to tag along with them in most of these activities, too!

I hope your Christmas would be ok and virtual hugs to Opa :)

I could tell how much you and your family miss her. The happy memories will always live on.

Happy Birthday to her! I am sure she's happy where she is right now!

julie, you are so right. it is not easy and being together helps a lot. thanks for the hugs

rach, we do miss her esp during these special occasions. it is still too painful

haze, i am pretty sure, too

Memories are all we have left even if death has taken our loved one. You definitely have a lot of memories to live in you for years to come. She is not really gone.