It was something unexpected. Although we know the girls would be joining tournaments if they get serious with vaulting. But joining a tournament only a month after attending lessons? That is something else.

MC was asked to join the tournament early this January. She agreed. She was attending two practices of an hour each per week.

IC was a last minute participant. She was asked a week before the event! I had to talk to her if she really wanted to join. In the end of the hour's lesson, she finally said yes. Meaning, she got only an hour of practice before the tournament!

They have been doing the same exercises; although of course, with a different group. But they were coached as intensively as could be, so I am sure something good would come out of it.

IC was so proud when she saw the vaulting jersey. They were asked to wear them for their dress rehearsal, on IC's first and last practice with the group. Wearing the jersey gave the girls a boost of adrenaline and confidence. Their last practice session went smoothly, despite some new group moves!

On the day of the tourney, IC woke up early. Shaking us awake, too, saying 'come, let's get ready for the tournament!' She's right. It is better to be early, after all.

Off to the riding arena. The girls' hair had to be done by somebody from the vaulting club because I don't know how to make the french braid! (Though I got tips during the tournament). They changed into their jerseys. And waited impatiently for their turn.

IC was a bit nervous. MC was focused. Both of them very excited and proud. And our dog, Rikki, is the usual: nervous, excited, too playful but I am proud to say, a little bit easy on the leash what with the crowd, the horses and the dogs all around! 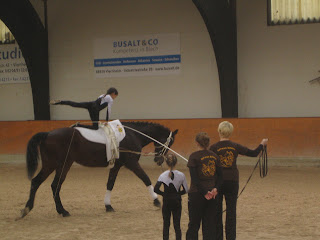 The girls' vaulting club was the second one called. The girls performed with grace; looking so small yet so big out there in the huge arena. I am so proud of them!

It was much, much later -- during dinner that we learned that IC fumbled, and only because my little girl admitted it to us. We told her that we didn't even notice her mistake; told her that she did it like a professional and we earned a proud smile for those words. Also, we told her that it was okay if she'd fall on her knees everytime she'd jump out of the big horse. (She refuses to be to be helped out.) 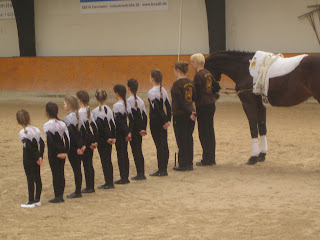 The girls' group got the last place in the tournament. Which was not a surprise at all because it turned out they were doing the wrong vaulting moves, therefore, they were not rated! Oh well, the trainers realized their mistake a little too late. But hey, the girls had fun! That's the most important thing.

But it's not the way MC saw it as she said, 'Look at them, they are cheating! They are doing the wrong moves.'
Posted by raqgold at 26.3.12