Today is a big day for MC. It is 'einschulung' or the first day of school. I know, it is a Saturday but...

It has been a week since the first day of school in Germany, but not for the first graders. They are always one week late. Why? Because their first day of school would be a special moment for them. It would always be on a Saturday, during the first week of school, and the whole school and the parents and relatives and even the godparents are encouraged to attend. It is really a big event.

One morning, MC saw some of her friends who are now second graders and they excitedly blurted out that they are practicing a great song for the first graders! I paused and laugh before telling them that it is supposed to be a secret!

Oh, there is also always a mass scheduled and attended by the school kids. We attended the mass for the first graders yesterday, too.

So how did our day started? By lots of surprises! 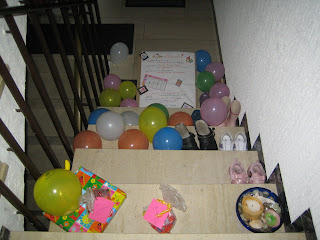 Look at what we saw outside our front door, balloons and gifts and a poem for MC. It was a really nice gesture from our tenants. And that became the flavor of the day, excitement! She got more surprises as her guests of honors arrived- composing of oma and opa and her godmother, Nadine and her friend. Even our neighbor rang the bell to give her a wrapped present, something that she actually requested for. 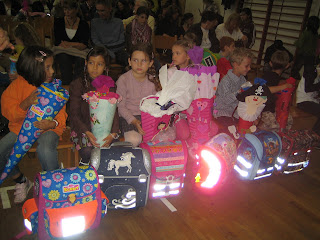 The first was spent with a program at the school's gym. With her schülranzen (school bag) and her schultüte (school cone), whe sat with some of her closest friends ready to enjoy the day. 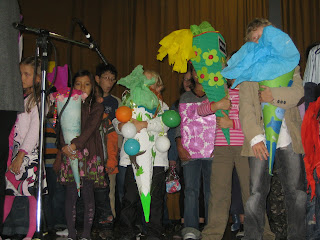 There were singing and showing of musical prowess by various school kids and in the end, the first graders where asked to go up the stage. With their school cone; a tradition since 1810 according to wikipedia:

School Cone, even though the word "Tüte" translates more as "bag" from German), often also called Zuckertüte ("sugar bag") especially in Eastern Germany is a paper (and later plastic) bag in particular.

When children in Germany set off for their first day in school upon entering first grade, their parents and/or grandparents present them with a big cardboard cone, prettily decorated and filled with toys, chocos and candies school supplies, and various other goodies. It is given to children to make this anxiously awaited first day of school a little bit sweeter. 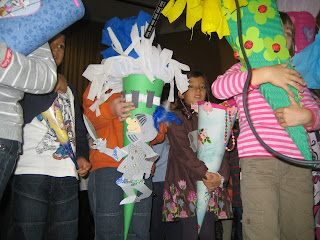 She's too small, it isnt easy to find her behind the school cones! 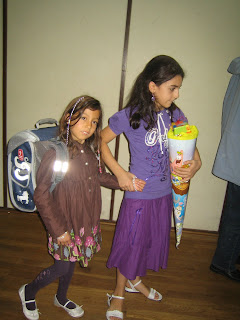 Her school buddy, the one who would act as 'big sister' to her in the school. Her buddy gave her a letter months before the school year started, introducing herself. The fourth graders were asked to be buddies to the neophytes :D 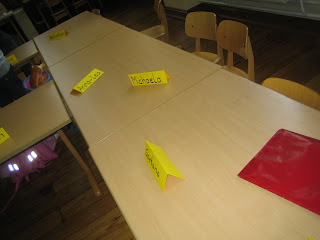 Here is MC's seat! Squeezed between her good friends from kindergarten. After the program, the grade one students went to their classroom to have their first 30 minutes of class. The parents, relatives, etc; had to wait outside, though there were free snacks, coffee and some sparking wine to ease up the waiting period. And yes, they received their first homework, too. 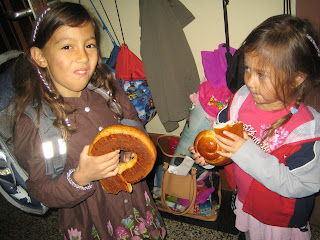 She was among the first to storm out of the room and she smiled exclaiming, 'mama, school is better than kindergarten.' MC shares her 'key' the school, a pretzel shaped into a key; to an impatient IC. 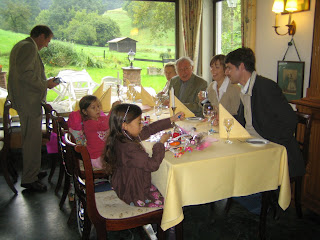 We celebrated with MC's guests by having lunch at our favorite restaurant, the Watzenhof. Look at the kids unpacking their school cone. We even had to write on their guest book because the owner said this is a very important day, which made MC smile wider. 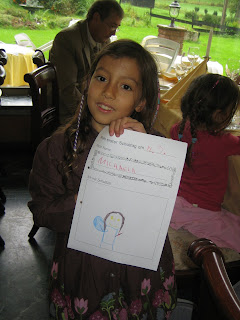 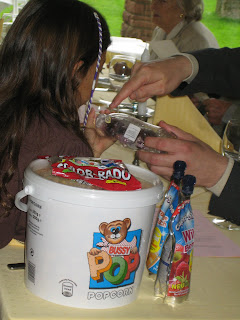 A quickly assembled gift from the restaurant owner, we're regulars guests, that's why. 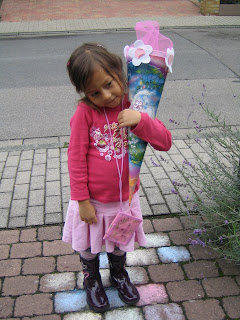 IC's got her own school cone, too. It's practice time for her :) 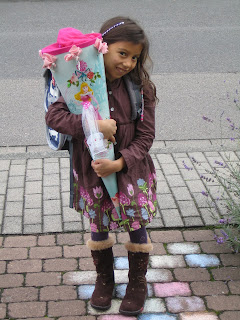 The official first day of school photo of MC.

All in all, a very exciting day for all of us.

PMN: Home and Garden features 'Ampalaya Grows in Germany, Too'.
Posted by raqgold at 13.9.08

Congratulations to MC on her first day in grade school. I enjoyed reading this post. I think it's a wonderful tradition that encourages children to be excited about school. I love the wonderful gifts and the beautiful school cones. I could tell that parents spent a lot of time and effort preparing for it.

if we were still in germany, jan would be sarting school na din. but here in singapore, they start in january. we plan to give jan a schultuete rin!

wow, that sure eases the transition to big school, huh! congatulations to MC!

what a blast to start their school! it's my first time to learn about the school cone. that is cool and it truly lessens tension/jitters for kids. congrats to MC!

congratulations to MC ;) this is the beginning of a long academic life ahead :) goodluck!

i love this german tradition, too bad we didn't have it in the philippines.. it's really great for the kids marking this great milestone in their lives and also for the parents and the rest of the relatives and friends. you are lucky to have such nice tenants- very thoughtful.

wow that's grand! that was a sweet surprise from your tenants.

so that's how you do it there. didn't know that, wonders of blogging no? so wide the world and there's much to know/learn.

got to work on my post for lukie's first day of school too.

Congratulations to you MC! Being a first grader does not just mean more work but it can also mean having fun. If schools here are like that,I think the students would really look forward to going to school. Ang galing naman!