Scrapbooking is for Kids, too

It started out as a small project.

We have our balikbayan box prepared, ready to be shipped to the Philippines; filled with Christmas goodies and presents as we estimate them to arrive Manila before Christmas. And then the kids realized, on the night before the box would be picked up; that they forgot to send special gifts for their relatives in the Philippines, especially for their beloved cousins and grandparents!

Uh-oh, that shouldnt be, they were really disappointed. Mama to the rescue. I told them we could create special Christmas decors with the glitters, colored pens and colored papers we have at home. The photo below is the result of our creativity. 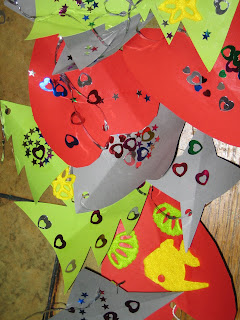 And then I thought, why not create something better. A collage of photos, souvernir items, arts and crafts; something like scrapbooking! I explained it to them and showed them how it would look like. They were excited to do it with me. When we started collecting the articles and printing out photos, the kids realized they dont need me after all. 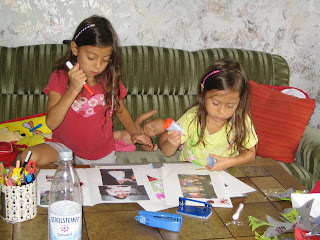 They hauled their old artworks out. They selected some photos to be printed, my only job for this project. They cut out some colored papers. Pasted figures and stickers. Sprinkled glitters. Drew and made use of their colored pens. They had fun! 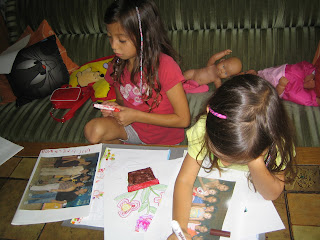 Look at the photo above. They were so enthusiastic about it, they dont even have time to smile to the camera. In a matter of an hour, yes, only an hour; they managed to create a scrapbook of memories. I filed them up in one colored folder and the kids wrote their names on the front cover and wrote a short dedication. 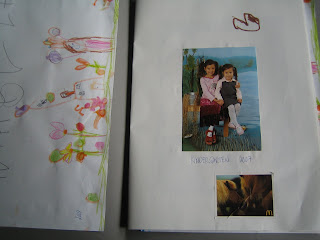 Here's a sample page. The kids reviewed their work with pride and they both lovingly placed that scrapbook on top of the already full box before I closed it and have it ready for pick up.

Now they are counting the days when the box would arrive in Manila. They want to know what the recipient of their scrapbook would say about their special gift. I must admit, I am excited, too.

A balikbayan box (literally returnee's to ones homeland box) is a ubiquitious cardboard box containing any number of small items and sent by an overseas Filipino known as a 'balikbayan.' Though often shipped by freight forwarders specializing in balikbayan boxes by sea, such boxes can be brought by Filipinos returning to the Philippines. Read more.
Posted by raqgold at 27.9.08

That's a wonderful project. I'm sure your family back here will appreciate the beautiful art work of the kids.

hey, we are doing the same task now, hubby and i were also busy this weekend, finishing our balikbayan box ;) we use transwing. what about you?

That was such a sweet thing to do!

rach - i told my family in pinas to send us photos of those gifts when they arrive, am sure the girls would have a blast

toni - we used to use transwing but i found another company with a cheaper asking price :D

sherra - am sure it would be appreciated :) thanks

this is a good way to keep them preoccupied.

Ang galing...this is one of the things we plan to do during semestral break.