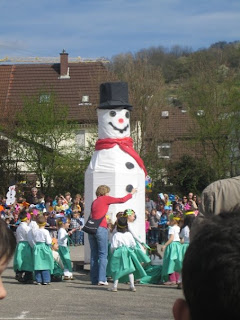 It was a warm day last Sunday. The kids wore their caps and t-shirts. The perfect weather to celebrate the Sommerstagszug or the traditional Summer Parade.

After all, the Sommertagszug is celebrated mid-Lent or three weeks before Easter (usually depends on the tradition in every land); to welcome the summer season and say goodbye to winter. It is Pagan in origin which represents the fight between winter and summer, at the end of winter in the old days, many pantries are empty and the children would usually go around begging for food.

The school kids which always are in the parade, including my girls, have to carry their own hand-crafted Sommerstagstecken or sommer parade sticks which is usually made of colored paper, the tip of which holds a sweet Sommertagsbrezel with a hollow egg and a pine branch.

The colorful parade would usually be joined by different clubs, schools and private companies and there would be goodies thrown for kids, too. A snowman made of paper mache or whatever easily burnt material is created, which is displayed during the parade. The highlight of the parade is when the snowman would be burnt in the end of the parade, to symbolize the end of winter.

Last Sunday's parade was fun because it was the first time that my girls were able to join together with their new schoolmates, plus it was a bigger crowd, and they had to walk a little longer, too. They were happy to receive a souvenir medal from the city for joining the parade.

But IC was happier because the bakeries and ice cream stalls were open such that she asked immediately for snacks after we decided to take her off the parade a little earlier. We already told her that she could simply give us a sign if she's tired and we would just inform her teacher so she would be allowed to take a break. She was having a great time but when the parade entered the area where the stores are open, she simply gave in to temptation!

As for MC, she pushed forward and even requested her Papa to accompany her to watch the burning of the snowman. Well, they did while IC and I found a place to binge away. Life is great and summer is here!
Posted by raqgold at 8.4.11

Please for Jesus sake do it once
I have made a blog at blogger.com Since i have added a google adsense in the blog but haven't made a penny with this. I need your help and support to help me make some money to pay tuition fees.

What you have to do is
1.go to http://positivethoughts2011.blogspot.com/

You can also follow my blog if you want