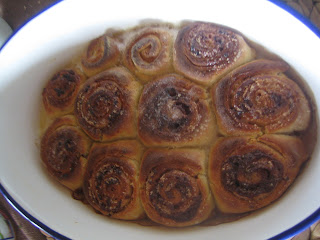 And I didn't know they call it Schneckenringe here in Germany!

All I know is that I love cinnamon rolls. And that I have never seen something like that in the bakeries I have visited.

I have been wanting to try my hand in baking cinnamon rolls but I was not sure as it seems to be a lot of work. Plus, I am not really sure if my family would eat it with me; not fun, right?

Then last week, the craving was simply too much. And so I googled for the easiest and simpliest way to create cinnamon rolls and I found more than enough recipe ideas. I chose one very simple recipe with very simple ingredients.

Make the dough. Beat butter, sugar, and salt in a bowl with an electric mixer set on medium-high, until combined. Add the egg. Combine yeast and flour in a large bowl. With a wooden spoon, stir in the butter mixture and 3/4 cup very warm water. (Add more water if dough does not come together.) Turn dough out onto a lightly floured surface and knead until soft and smooth. Shape into a ball and place in a lightly oiled bowl. Turn the dough to coat with the oil, cover with plastic wrap, and let rise until almost doubled -- around two hours.

Create the glaze. Melt butter in a saucepan. Add the brown sugar, corn syrup, and vanilla. Stir until combined. Pour the syrup into a 9- by 13-inch baking pan.

Shape the rolls. Melt the remaining butter and cool slightly. Mix sugar and cinnamon then set aside. Divide the dough into two equal portions. Roll each into an 8- by 14-inch rectangle, and brush with the melted butter. Sprinkle with the cinnamon sugar and pecans. Starting at the 8-inch end, roll each into a log. Cut into rolls. Place the rolls in the prepared pan. Cover and let rolls rise until almost doubled -- about 45 minutes.

Heat oven to 325°F. Bake for 35 minutes, until lightly golden. Cool slightly. Invert pan onto a plate and serve warm.

When I served Cinnamon Rolls to my family, my husband was pleasantly suprised and said, 'oh, you know how to make Schneckenringe? Maybe you should start thinking of opening your own bakery.' Wow, what a compliment!

If I had know that he loves it, too -- I would have experimented a long time ago.

Oh, but my girls aren't too enthusiastic about the taste though :-)