Days Four and Five of Donation Drive for Haiyan Survivors 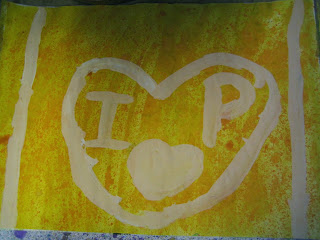 And I did say more people called. And there's also people who just arrived on our doorstep, not to mention those who simply left their donations leaning on the front door. It felt like Christmas, I tell you. I am so happy for the people who would be receiving these generous gifts.

There was this call about a woman who said she gave copies of the donation letter to her officemates, right? She left her bundle of gifts leaning on our front door late afternoon. She promised more items would be coming.
Next came an elderly woman a house away from us. Her husband was one of the first people the girls and I approached with our letters. We found him working in the garage. I asked him if we could leave him our letter and he said yes. Then he added, 'back more than 50 years ago, it was Germany who needed help, and help came. Not it's our turn to help.'

Two days later, his wife rang the bell with an envelope in the hand. She gave me the envelope with a smile and said his husband is away until this weekend and she wanted to have fresh air so she came to give me their donation. Curious that I am, I asked her permission if I could open the envelope to see what's inside.

It was a shock to see a check for 1,000 euro! I was overwhelmed by emotion that I could not help the tears. I have the generous woman a hug and thanked her. She said they could have given the amount to different organizations (remember, I included the list of suggested charity groups in my letter); but chose instead to give the whole amount to use because they trust that we would know what to do with the money better. I hope we won't fail that trust.

Then, just before I go out to walk the dog, I saw a woman outside our front door. She smiled and said she's got goods for donations in her car. I didn't hear the doorbell though. It turned out she was hesitating because she was not sure if the goods should be packed in orderly manner in boxes! I reassured her that we would be packing them in appropriate boxes when we bring them to the shipping office. She also wanted to explain to me some items she brought.


There were bed sheets and towels, toiletries, candles and lighters, plus a number of mini canned fuel that she said could be used to cook food. I examined them and I told her that I would have to place labels and notes for instructions on them. We don't want to have any untoward accidents happening because of our donated items, of course. (I think I need to ask if they would be safe to be shipped, too.)

Oh, she also brought some stuffed toys. I'd pack them along, too.

I went to a pharmacy and I consulted with the owner/pharmacist about my list of suggested medicines for donation which included those for fever, pain killers, diarrhea, etc. He informed me that children need different types of medicines, too - like drops. I told me to simply create a list. I gave him the budget and that I would pick them up middle of next week. He added that he would also add his phamacy's donation next week. And that he would also provide labeling materials so I know paste English translations when needed.

Late in the day, the bell rang and there stood two smiling young boys with their mom, each of them carrying big bags. It was the mom who called a few days ago. I told her we needed baby things. She brought diapers, band-aids, kiddie toothpastes and toothbrushes, baby food, powdered milk, soaps, shampoos, towels and bed sheets. 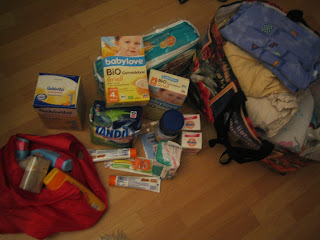 Then when my husband came from work, he asked me if I checked my email. It turned out someone sent him an email asking about the donation letter. A few seconds after talking about it, the phone rang and it was the email sender, asking if they could come and bring the donated items. She said she need to bring it that night as she asked her officemates for donations, too -- and her car is full!

I immediately lost appetite for dinner and run into the garage to make a space. The girls decided to help me, too.

The woman and her son arrived with two heavy boxes filled mostly with items needed to treat surface wounds and some toiletries, plus candles and matches. She also asked if they could also give used items? Of course :-) She promised to come back with underwears when asked about other important items. The boxes she gave us was given by two of her officemates. And she told me that her eldest son, who is a volunteer firefighter, wanted to come to help next. He has given copies of our letters to his classmates, too. 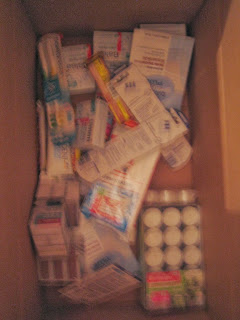 I expected this day to be a quiet day. I sorted out the donations, the girls helped me clean the house and then we baked cookies which would serve as thank you gifts for our donors.

But around 4 p.m., I got curious and checked the front door. There was a small bag of donated items waiting for me. I would guess it has been there for a long time because the items were already cold!

I am sure this came from a new donor because inside the bag is my letter asking for donations and loads of toiletries (toothpaste, toothbrush, razor, soap) and canned goods. Whoever you are, thank you very much.

Meanwhile, my girls? They got busy making happy drawings that they intend to place inside the donation boxes. I think it's their way of coping with the images they saw and the news they hear.

I know that these donated items would not be enough, but I hope and pray that when the stomache is not hungry anymore, the soul would also start healing slowly.