I got a letter from MC last week. 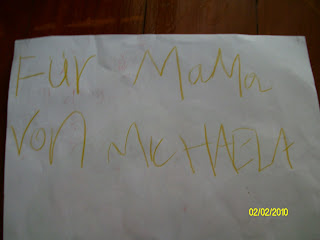 And her letter states:
Mama, ich mag dich. Danke das du mich auch magst.
Mama, I want you. Thank you that you want me, too. 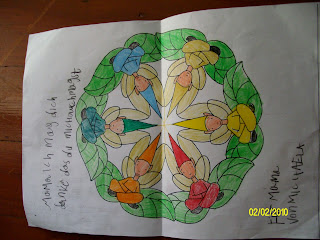 Is this her way of apologizing during her series of tantrums the past weekend in which she would shout bad words to me; and would always push me away, saying she only want her Papa?

I dont know and I hate to analyze.

You see, after she would calm down, I would always told her that although I am not saying anything when she's got a tantrum; her bad words hurt me and those that could hear them. And I told her that deliberately pushing me away, or anybody for that matter; doesnt make one feel good, too.

Receiving this letter from her could mean something, she knows what she is saying and doing during her tantrums; only she could not control them because she is ready to hurt.

But, talking about what she did after her tantrums helps, too.
Posted by raqgold at 7.2.10