This Year's Halloween Showed Me...

That my girls, aged 7 and 9, don't need me anymore when it comes to dressing-up.

When before I had to create a costume for them months ahead, when before they are already bugging me if I am ready to create a monster out of them days ahead, when before I had to assemble my very limited make-up kit hours ahead -- those days are gone. (My girls' impression is that only dark and horror costumes are allowed during Halloween. I have been trying to convince them to re-consider, not successful this year.)

Days before Halloween, the girls were already practicing. Dressing-up, dressing-down; complete with make-up and accessories. Their fantasy plays were in high gear.

On Halloween night, while I set-up the treats outside; I didn't see the girls. When I set-up dinner, I didn't hear from them. But when I announced that dinner is ready, both of them dashed down in costume and fully made up!!

The girls are growing up. 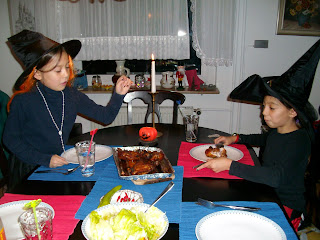 But still, they needed me to walk the dark streets as they knocked on doors, ring the doorbells. And they hold my hands when they encounter unexpected street ghosts :-D 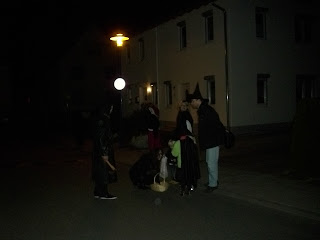