It was two weeks before the first of December and I haven't started the Advent Calendar-making for both girls.

I thought I could get away by re-using the old ones; but when I talked to the girls about it, they both frowned on the idea. In panic (I have to create 48 doors after all!), I decided to check out the internet for an easy-to-make and very simple Advent's calendar and I ended up here and here.

Well, I wanted to create a Santa booties calendar and a Christmas City calendar. It turned out, it was not easy to create the booties. The girls (it's their first time to join me in creating their own advent's calendars thus starting a new tradition, too) needed at least an hour to finish one!!!

In the end we decided to just incorporate the two ideas, and here are the results:

For our Christmas City Advent Calendar we used the following:

To Make the Base:
Using a hard cardboard, wrap it with aluminum foil. Use a masking tape to fix the foil in place.

Before fixing your city on the base, plan where to put the towers. Use a glue gun to keep the towers in place on the cardboard base. It is best to start in the middle so you have space to move the towers around while creating your city.
﻿ 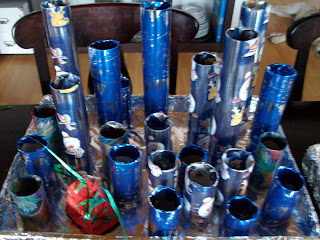 To Make the Roofs:

Create 24 circles from the two colored foil, (example 12 from the silver and 12 from the blue). Then cut out a part of each circler (at least 1/4), then fold and use a stapler to fix them in place. Keep the rest of the cut up foils on the side to scatter them around the Christmas City's base later.

To create a support for the roofs, cut 24 strips from the used plastic folders and staple them together. The strip sizes depend on the opening of your paper tower rolls, it should slip easily in place. Then use a glue gun to fix the strips of support into the roofs.

Afterwards, add the numbered clips on top. And scatter the trimmings, using the rest of the cut out foils and some balled up alu foils. (Instead of the store-bought numbers, make paper circles, write the numbers on them and staple them on the roofs.)

Then we just added the Santa booties as seen on the first photos above and below: 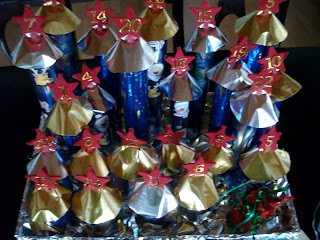 And don't forget to stuff papers or whatever into the high towers to remove the gifts easier. What we did, we placed some cardboard pieces, and placed the gifts items covered in kitchen papers into the towers before adding the roof.

You might want to add some cottons to create a snowy Christmas City. Some Christmas balls and decors give more Christmassy feel.

Both Advent Calendars took all three of us around four hours to finish, that's including the Santa booties. And excluding the time in putting the fillings inside, I am planning to fill them up tomorrow night.

Tip: If you plan to do this Christmas City Advent calendar, make sure you have time to collect enough paper rolls. I had to ask our neighbors to collect all their papers rolls or else I won't have enough to work on.

Another tip: If you are like me, who tends to create homemade Advent calendar year after year, try to find an interesting and neutral store-brought numbers for the calendars. It would really make the calendars easier to make.

Very nice. I still have colored foil and I can collect the toilet paper cardboards from the bathrooms! Good thing it's school break already, I can make these with the girls. :)

hi anney, thanks! we had fun making them.

hi connie, am sure your girls would enjoy creating their own christmas cities. ours are slowly becoming a damaged city na e :-)