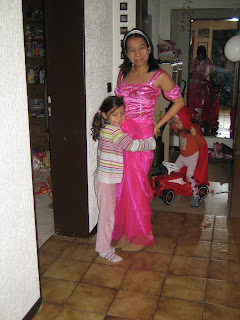 Well, I did attend a costume ball: the one that involves women of all ages dressing up, drinking, dancing, having fun and partying until the wee hours of the morning. That was during the Weiberfastnacht or Fat Thursday.

I did say my friendly neighbor helped me create a sort of Alladin costume; and she even took time to sew the rest of the materials left for MC's gown.

What did we do during the costume ball? Well, I arrived early, although the program would officially start at 20:11; I decided to come early, around 18:30 pm, just because I wanted to find a nice seat. And whoa, there was already a long line of witches, bees, pirates, hunchbacks, etc! When I got in, I cant believe my eyes, the hall was almost full! I am glad I told my group I would be joining, or else I wont have a reserved seat.

I sat between the cats and the 80s girls. Well, of course my eyes got busy. I saw a group of bees, a group of jungle women complete with real leaves, a group of big haired blond girls -- I saw funny costumes, chic costumes, simple ones and those really creative ones. Fascinating! Since I was wearing a sleeveless dress, as per my husband's advice, I asked for a rose wine to keep me warm; and had a nice mushroom soup with it. Knowing that it would be better to eat and order my drink before the program -- I immediately asked for a plate of french fries and a bottle of mineral water! Then I am ready to party!

We were the first on the dance floor! I so love dancing and I so miss it! And of course, there were a great program consisting of women from age 80s to 15 -- everybody were simply awesome: belly dancing, the 80s with Abba, etc but the highlight of the show was the All Men Ballet!!! Really! Wearing tongs and fake eyelashes and high heels and leather sexy tops, they gyrated with their beer stomache to a disco tune. They really brought the house down! I was really sorry that I decided not to bring my camera :(

But here is something that I only discovered though I always see this on the television everytime there is a festival around Germany -- the Schunkeln dance. There are really no words for it in English; but this dance is fun!. You link arms from with all those in your table and sway from side to side in rhytmn with the music, then in a minute there would be someone who would be standing up and down, still with arms linked, until everybody would be swaying standing up -- the adventurous ones would even stand on the chair! Well, I do love this schunkeln dance! Good thing the chairs were stable enough! We did this dance for how many times I already lost count!

Well, do I need to tell you that I was there with my group until the dance music stopped? I so enjoyed it so much. Plus, I had to take care of an acquiantance who had too much to drink. She's with someone but that someone was also tipsy already. I had to know how they would go home or else I dont be able to sleep.

But first, they had to find a corner to loose off some of those excess drinks. You know what I mean. Good thing they would be walking home. But still, it took sometime before the other mom could really find her orientation. I saw them off, both swaying their way back home. (I saw them the next day and am glad they were okay).

I was home before 3 am. My shoes were killing me but I dont care. I got to dance! But before making myself ready to bed, I had to make sandwiches for my kids for kindergarten; I had to tidy up as toys were scattered all over the floor; I had to prepare clothes for the kids for the day -- I feel like Cinderella after the ball :D

And the kids woke me up at 7 am; and my husband leaving a message on the answering machine apologizing for waking me up so early but the kids must go to kindergarten. Actually, we arrived late in kindergarten, not because I slept late; but because I had to tell the kids everything about Mama's first costume ball.

And here's MC's note: 'Papa should join the All Men Ballet,' which made me really laugh!
Posted by raqgold at 4.2.08

you know what, i'm a sucker for costume parties and i love to make my own costumes. lovely pink dress you have here ;D

at last nakita na kita, dito,
thanks for sharing your photo.....

bye and regards to all.

Sharing your ball party story with the kids is just so sweet, kahit na ma late ! I'm sure the kids were excited for you, I can already imagine ! I missed this ball party when a friend of ours organized last 2006, kasi naman kulang sa tulog sa pag aalaga sa mga anak, they were still young at that time ! I hope we could also organize in the future, impatient, that would be really cool ! Did you take a video man lang :D ?

Finally got to see a photo of you. Cute! I'd love to go dancing again, sometime. My husband keeps promising me that we would take ballroom dancing lessons together for fun and exercise... Someday it would happen.

you described the FUN so well I can imagine it, I was actually smiling while I read your post. Nice costume

mhalou, dancing is a great exercise tapos you get to dress up pa di ba :D

haze, i forgot even to bring my camera, arrgh. that was also the reason why i only attended that party now, coz i cant leave the kids alone with papa; but now that they are bigge, party time na, hehe

marysmom, my husband promised to take me to ballroom dancing lessons when the kids are bigger, let's see :D

ami, i really had fun!! am glad i was able to convey it in my post.

nice hearing your voice too.....ligaya talaga ako, at nasurprised....
thanks for calling and your time, too.

i like to call you now, pero baka busy ka, silip lang ako dito, to say na On the way na yon Paket sa iyo, baka bukas you receive it....

I can just imagine how fun it is to dance the night away hahaha!!! I'm glad you went and shared your photo, nainggit aketch!

It was so nice of you too to be the "care giver" to your friends. Shows you really are a good person.

As always, you made me laugh with your Cinderella effect at the end!

lovelyn, mahirap maging cinderella talaga :) hey, you dont live too far away, maybe we could do that someplace in europe, too. party the night away and be cinderella in the morning again.