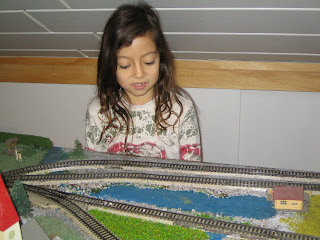 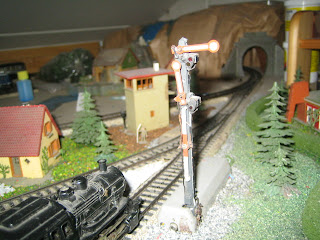 These Maerklin H0 model trains and accessories are now considered toys for the big boys. Number one because the models are now rare and number two because they now cost a small fortune.


These are my husband's model train set which he started collecting in December 1963; the first set came as a gift from his father. He remember not being allowed to go inside the living room for a week before Christmas because the opa was trying to assemble the whole set for him.
That Christmas gift awoke a passion for model trains, specifically for Maerklin H0. Through the years, he added more to his collection. There was even a time when he took over the basement room to set up his model set, the room is around 3 meter by 2.5 meter, and it was his own train station. He got lost in his own world there: posting lights and stations, building bridges, creating streets, dugging tunnels and ponds and rivers, constructing houses, planting trees and schrubs, adding people and animals, even cars and fences -- everything that would catch his imagination. 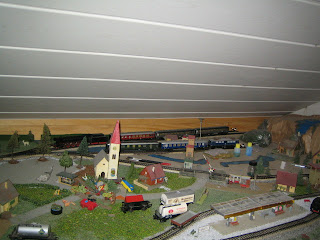 He had to pack this treasured collection in boxes for long years before he got an inspiration to resurrect them again because of the kids. It took time: finding the right place to build the train set, measuring, buying the materials and constructing the dream. Slowly but surely, the new station for the model train set is becoming a reality. I love looking at the curves and straights; the circle of water and patches of grass, and the dark corners of the tunnel. It is a continuing work of art; for both my husband and the kids. The model train set needs time, loads of creativity, some money and fun. 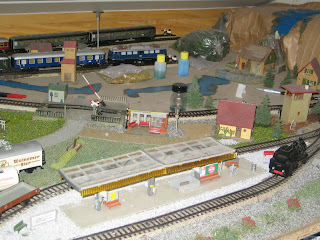 They dont work on it regularly because they wanted to focus on it when they think they would be enjoying it; and not because they are obliged to work on it. It is a labor of love and a fun time. And I simply adore their concentration when their hands are busy in this train station: they are quiet yet you would know they are having enjoying it. Those curves and straights along and between the stations are becoming more alive; slowly but surely as I already said.
This is my post for PMN: Fam Pics this February's Straight Theme.
Posted by raqgold at 3.2.08

Impressive model trains. My son would love to see those trains in action.

Mine is up:
Straight From the Heart

rach, that's why my girls also have loads of boys friends, hahaha.

Very cool! I would be playing it for hours.

Would love to see that! We used to have something similar when we were little, but nothing that expensive.

tintin - that is why the girls are the hit when it comes to boys friends :D

joy - see, then you need to come back to germany just to see this train set , hehe

Wohoaaa train 1963 collections! Galing naman Raggold and expensive but it's worth collecting afterall :D . Is this hard to assemble ?

What a cool thing for them to do together!

My dad has a Lionel train from the early 1950s. It's so cool...there's a dairy truck, for example, with a little man who loads and unloads tiny magnetic milk jugs.

We only set it up a few times, usually around Christmas. It would be amazing to have a space dedicated to making a train-land--such a good thing for kids.

Galing mo mag-ising ng "straight". I was thinking of finally joining PMN's fam pics but I failed again because I couldn't think STRAIGHT. :) (Sorry, that just came out.--- truly, no pun intended.)
What a wonderful thing for your husband to share with the kids!

haze, when my hubs started collecting them, they were not so expensive yet. kaya nagugulat sya sa presyo ngayon but cant resist :D

julie, plotting is easy but when the electric is being set up, that's when the real work comes in. email me na your number!

lea, oh my husband simply love playing with his toy trains until now, such that we needed to create a space for it :D

marysmom, hahaha, slip of the tongue! next month's theme is easier and you have enough time to think about it. and yes, the kids love to play with the train set. me, too!