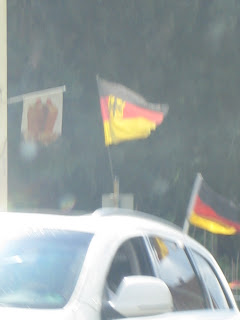 The European Fussball Cup 2008 ended with Germany 0:1 Spain.
But you know what really makes me proud to be in this country when the fussball season starts, is the great pride of almost the whole country in wearing their team's color; of the quickly multiplying German flags planted in the garden, hanging on the windows and even stuck on their cars! You would see the German color flying all over.

And not only that. Even the kids would appear in kindergarten with face paintings of the German flag. You would hear them cheering for the team, singing together the most popular songs urging the team to win. And you know what, it is really a party everytime there's a game for Germany. Kids would be allowed to stay up late :) People cheers so loud, fireworks explode everytime there's a goal and when Germany wins, the night would be serenaded with car horns! I love it :D Just like I try to cover the stillness of the night when the team looses :( 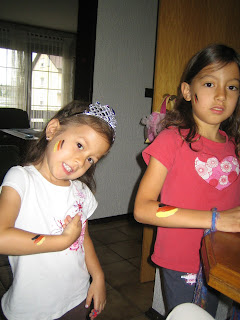 Oh and when they loose, there's no problem as there would be another game. As one kid told me after the championship game and Germany's team didnt get to score: ' You know what, Germany is the second best, Spain is the first best.'
As for my kids, they didnt get to watch the championship game but before going to bed they cheered for Germany first chanting 'Deustchland soll gewinnen' (Germany must win). And when they woke up the following day, IC immediately said 'Germany won, right?' When I shook my head she simply smiled and said, 'Well, next time they would win!' And she went on cheering again :D

The power of positive thinking. And I think this is the right way to buildin sportsmanship.
Posted by raqgold at 8.7.08

oh i know what you mean, i have the feeling that it is the only time the germans feel proud to be germans.. you know with that WWII history, the germans are not comfortable showing patriotism and all that involves around it. but during football season EM or WM - everyone is proud to be a german even non germans living for a long time in germany :) - that includes me of course :)

Europe should be proud of both countries. They beat all the other teams to make it to the finals. That's no easy feat.