Swimming and the Rain 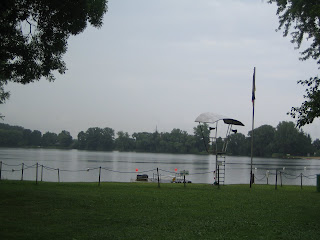 I did promise. On Thursday, we would go swimming.

Nope, I forgot to add 'but NOT when it is raining.'
And then it was Thursday. And we MUST go swimming. Even if it is raining!
First, as arranged, I picked up the girls from kindergarten; and then picked up F, MC's friend, from another kindergarten. It was a bit windy, and it looked like it would rain. But I did promise the kids we would go swimming this day. 'Even if it would rain,' MC stressed.
This time, I'm drove although it was only a couple of minutes drive. The parking area was not really full. There were only three cars, including ours! Should we go home? Of course not, we'd go swimming even if it pours!
Paid the fee. Found a nice spot to spread our blanket, under a big tree with thick branches, of course. And yes, there's enough space to spread our blanket, remember the parking area?
Changed into our bathing suits. Prepared lunch. Then, raindrops! 'Mama, good thing we are still eating,' IC said. Huh, okay.
Then off to the swimming pool. Nope, no swimming in the sea today, it would rain, remember?
IC would only sit and eat sliced apples in the corner, while MC played with her toys on the pool steps. F and I enjoyed the water. And then it rained, and it rained! Whew, I would be wet if am not already in the water.


And my brave girls who wanted to go swimming even it it would rain? IC continued eating though she did used her towel as a cape to ward of not being too wet (which wasnt really successful); and MC wont jump in the water because she said she would freeze so she stubbornly continued with her foot paddles. And F and I? Oh, it is warmer in the pool, but my girls wont believe me. They got wetter and wetter...
Until I told them, enough of this nonsense. Let's go home.
But first, they wanted to eat ice cream. Yes, even if it's raining. 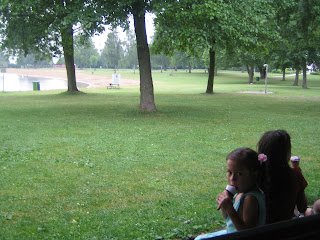 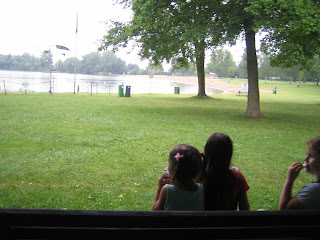 What I would do to make my girls happy! Well, it was fun, really! Next time I wont forget to bring an umbrella, though :)
Posted by raqgold at 21.7.08

brava mama raq, thumbs up for you - swimming under the rain!

You girls are awesome for not letting a little bit of rain ruin your fun :) . It's been raining alot here too that's why we haven't been to the pool that much. The rain usually comes with thunder storms and they close the pool around here. I don't mind swimming in the rain ;) .

hahaha :) your girls tricked you 'ey?

I love your carefree spirit. It must have been such a fun day for all of you.

We have a very strange weather in Europe isn't it? Even in Marseille which is a city of sun rains a lot. Well, in my place we need water because it's dry and humid anyway so I guess it's not bad at all for the plants and trees :D!

I am sure that girls had fun even if they were not able to go swimming, at least they're have eaten ice cream just beside a beautiful nature :D! Great escapades ;)!

lady cess, i wont get peace until unless i give in plus i think it would be 'cool' to swim while raining, hehe

lovelyn, thanks. i tried very hard to change their minds but they wont give in; and now I had to thank them for i enjoyed it.

KK, i was a bit hesitant to plunge in the water at first; but since the water's warm -- why not? and yes, the weather's not giving us enough sun to enjoy the pool.

haze - such weird weather! last year we're always out swimming on weekends; this time, hmmm - not once, yet