How did the kids cope with our loss?

IC works it all out in her fantasy.

She said she's been seeing and talking to oma for a few days now. Like yesterday, she wanted a new dress to wear for oma's funeral. She said she wanted to show off the dress to oma. I left her alone for a minute when I came back, I saw her dancing and flaunting her new dress in front of the mirror.

I asked her what she's doing and she told me, 'mama, I am showing off the dress to oma. Oma asked me to dance for her so I did.'

And this morning? I left her for a second in front of the breakfast table. When I came back she told me that I just missed oma for a few seconds. I asked what oma wanted and she said, 'oma wanted a piece of bread and a bottle of water. And then she went to the rooftop to have her breakfast.'

I told her it is too cold to have breakfast on the rooftop. And IC said, ' dont worry, mama. Oma's an angel now, she's got her wings and a pink angel dress.' As if to assure me that oma wont feel the cold anymore.

As for MC, after the funeral and during tea time with the family and friends, she worked on this drawing -- which shows the funeral procession in the cemetery. She said it is not yet finished, there must still be something under the brown earth. 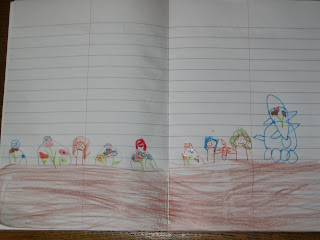 I think it also helped a lot that they got a book from the woman pastor who held the memorial mass. It was entitled, 'Adieu, Herr Muffin' (Goodbye Mr Muffin) from Ulf Nilsson which talks about a death of a guinea pig. I read it to them last night and it told them all over again, in the simpliest of terms, what death is all about.
Posted by raqgold at 17.10.08

So sorry to read about Oma. Condolence to the whole family.

I'm sorry to hear about your mother in law :( hugs and prayers to you and your family, especially to the kids

condolences :( i think the kids are doing well mourning and coping with their loss. i know some children who just kept quiet about the loss of their grandparents. this way they can express their pain and loss and be able to deal with it

Did IC really see her oma or was she just imagining it? Am so sorry to hear about your loss. i know death is too much for the children to bear.