When it starts to rain, do you know what my kinds reach out for? Nope, not their raincoats, nor their rubber boots nor their umbrellas... 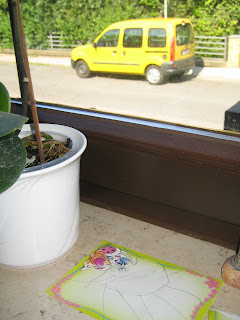 They would quickly seek out their drawing materials and start to draw a smiling sun; one after another. One of them would be assigned to draw more; one would start running around the house to distribute the drawings of the smiling sun from one window to another, from one glass door to another. 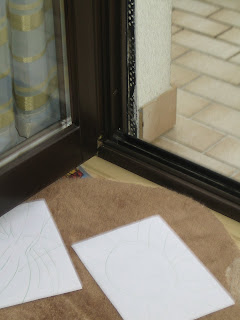 They would place those drawings where the sun usually shines through. Why? Because they believe that when it starts to rain, the smiling sun would stop the rain from falling. And oh, how they believe this. 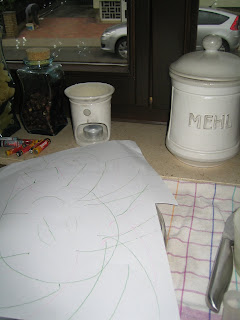 And you know what, most of the times, the rain would stop. That is, as long as the rain doesnt start pouring like crazy; because by then, I would tell them, it would be too late. 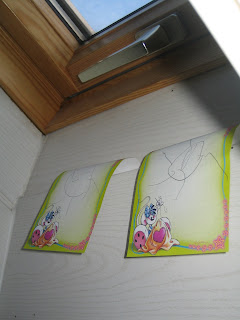 Actually, the magic of the smiling sun against rain is a childhood 'belief' coming from me. As a child, my playmates and I would usually draw smiling sun on the pavement to chase the rain away.

Since the girls have used up their chalks, they've decided to draw using pens and papers instead :)
Posted by raqgold at 30.6.08

And yes go against the rain, it's summer anyway :D !

oh i used to do that and from what i remember it really worked :) but when we moved to baguio, it didn't work at all .. i used to tell my mom, why the city is called this way - kasi laging binabagyo!

How nice! I love the enthusiastic spirit and strong faith of children. This reminds me of my younger days. Me and my playmates would use chalk to draw a sun in the street whenever we saw dark gray clouds in the sky.

I never got to do this when I was young, so Mary does not do this either. And I love the rain and she does, too- whether it was the bitter cold rain in Colorado or the warm sprinkles or heavy monsoon rains in Manila. Love the rain! The sun can come out in its own sweet time...

how inspiring. dapat gayahin din nating mga grown ups, when we have problems, we make drawings or positive statements and post them everywhere =)

I'm getting a lot of ideas from you, Raqgold. I'm filing them away because I know, sometime in the future, they'll come in handy with Thomas.

My daughters did that one rainy day. They asked me, "Mamie, what is the rain afraid of?" I answered, "The sun." They hurriedly left me, started drawing pictures of the sun and placed it in our windows.

This is new to me. I think what your girls are doing is their version of affirming the return of a sunny weather. How cute!

rach - it adds to the excitement, not knowing who would win, the smiling sun or the rain :D

marysmom - oh we love the rain, too. but this kind of thing brings some magic to them esp when the sun stays and the rain goes. you might want to start doing this with mary, it is something different naman.

lady cess - wow, that's another way of looking into this. but why not draw something positive if it would be good for us?

joanne - it is good to learn together :D

geri - yep, they do want the sunny weather to come back. or sometimes they dont want their papa to be wet as he's almost always in the garden working.