How could she have grown up so fast after staying away from our sight only 24 hours?

So we let it go but we tried to talk to her about the benefits of staying overnight in kindergarten - like she would be with her friends, that she would be with her teachers, that they would enjoy loads of suprises, that this program is definitely for pre-schoolers only; that it is really a privilege to join and to enjoy.

It was a long process, read here. But I guess, we underestimated her. It was the whole family who bought her to kindergarten to find her a sleeping space and prepare her bed. And we dawdled a little, I took some photos, we talked to some moms and chatted with the kids; until we simply had to go for we have nothing more to do. 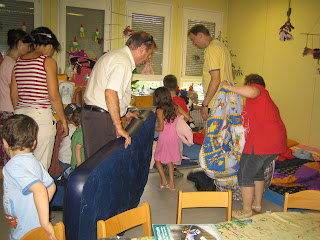 Where to go with MC's things? Friendly chaos. 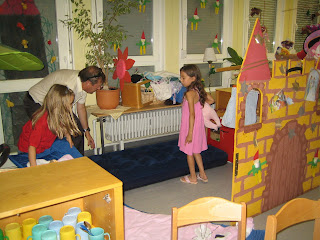 And she and one of her closest friend found a corner, inside the castle :D 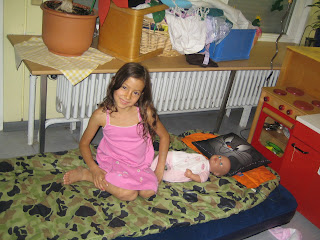 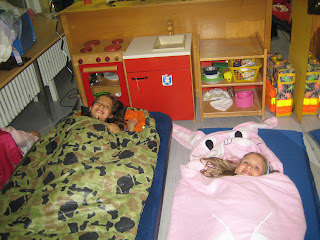 Ready!
MC was smiling when we left, already busy in her corner with her friends. We didnt think that would be that fast, huh. Of course Papa cant resist reminding the teachers that they could call us anytime. He even told that maybe we should put the telephone near us when we sleep, which made me smile, really.

Going home, IC was a bit sad because she said she also wanted to sleep with her sister. And Papa questioned me on why I have only three plates out for dinner. Erm? Where are you, dear papa :D I guess it is us, the parents, who arent really prepared to let go!

But you know what, we were a bit apprehensive because that night was a stormy night with thunder and lightning, I cant help thinking about the kids.

The morning after, at 9 am, I picked MC up in kindergarten. She's ready. Her airbed and sleeping bag already folded and are in pushed in one corner, together with her backpack. She greeted me with a big smile exclaiming she had a great time. 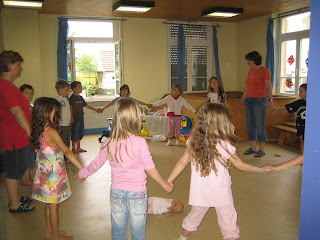 The goodbye song before finally going home
I also talked to the teachers who said, it all went ok. Nobody really noticed the storm that night; which is a good thing. As for MC, she enthusiastically told me her stories from last night.
She was bursting from so much stories to tell: that they had to ride the fire truck (complete with blinking lights and siren) going back to kindergarten as the rain shower was too much; one teacher who managed the barbecue for the kids had to stay outside in the rain or else dinner wont be ready; that another boy squeezed in with her and her friend because he wanted to sleep with them; that she and her friend got a warning because they were still talking when almost all of the kids were already asleep; that the boys slept earlier than the girls; that they didnt shower only washed up; that her airbed became the center of attention as most of the kids simply wanted to jump up and down; that she didnt get to cook her famous scrambled egg...etc!

But the first thing I really noticed was this, she's only gone overnight but she's grown. She has collected confidence during the 24 hours away from us. She's acting more and more like a big big sister to IC; she even started babying IC. She wants to help in more chores. Her decision-making process is faster. And in her own words, 'I can do more, Mama, trust me.'

And I only picked her up a few days from the overnight stay. I guess, growth overnight is indeed possible.
Posted by raqgold at 5.6.08

i sense tears in your eyes... there's none? well my eyes are a little misty ;)bittersweet ito.

My son Raymund also slept in school some months back and it did him really good. Being away from home even for a short time develops the kids' self confidence :D

lady cess - mixed emotions and right, bittersweet! we should also be prepared as parents and who should hold our hands when the time comes kaya?

amiMD - they begin to start finding themselves even for such a short time.

That was quick growing up!
Someone who has confidence really naturally becomes a blessing.

belen - bahay bahayan talaga kaya they enjoyed it a lot!

lionel - that was real quick, we're not ready for it :D

See, she enjoyed it! No worries, she's indeed a big girl now :D !

Keng, ang mga parents ang me separation anxiety, not the kids :) I know because I have been to several activities like these, hehehe. Makagawa nga ng post about this with matching old photos :)

haze - now am worrying for my husband and i, could we cope, hehehe

julie - you hit the right button, parents have more separation anxiety as kids! i'll wait for that post!