MC's kindergarten continues with their program for the pre-schoolers and the past weeks they had exposures in the local fire brigade; where the highlights would be the kids being allowed to hold the water hose while on a drill, and of course, they rode the fire truck complete with the lights and sirene! They visited the local police force and they got to ride the police car, of course.

Last week, they went over to the neighborhood bakery. MC told me they were allowed inside the bake shop, given a tour and in the end, got to mix their own dough and asked to shape their own bread. These bread where pushed in the oven and were given to the kids before they go back to kindergarten. Plus, they were asked to dig into a big basket full of bread -- they each got a bag of bread each, not to forget the baker's hut! 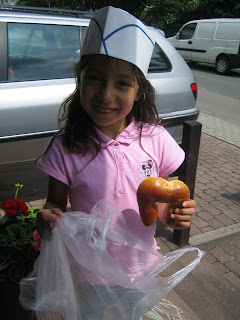 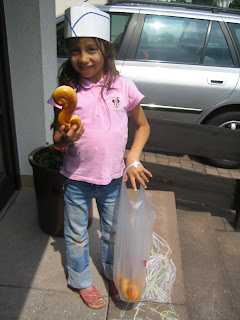 Here is MC, proudly displaying her treasures. She generously gave IC her own share, too.

And then, a few days later, the pre-schooler were off to the bank. They were told how a bank operates by showing to them how all the machines operates esp the ATM machines. They were shown the vault room in which the kids were so fascinated they kept on saying it was where the gold treasures are being kept in prison (they associated the cell-like door in prison ;D). KNow what they got from this visit? They all got a gift certificate for five euro, now that's generous!

And then MC gave us a tip saying: 'Mama, dont you know that you could bring your jewelries and other valuable objects in the bank and put them in a small box and that would be safe; especially if we would be going in a long vacation and nobody would be staying in the house.' Talking about the safe deposit boxes.
Posted by raqgold at 15.6.08

i wish there is a field trip to the bank in my son's school too. would be a great way to teach the kids on the value of saving money =)

That's a great field trip. Yohan has visited the local fire station and police station too. Yohan and his classmates, however, weren't able to ride the fire engine and police car. I'm sure Yohan would have been thrilled given such an opportunity.

Cool! Its' not only just a field trip but an important discovery for the kids. They are starting to know how the bank works and they will also down the line learn how to save money.

lady cess - you are right about that. exposing them so such outings would let them start asking about the value of savings :D

vk - MC dont want a self made tüte, i bought her fertig schultüte coz she wanted that one, and nope, not yet puno. i am still going around and shopping for things; i also have a small one for IC.

lionel - you are right, this is already social studies hands on!

rach - really? sayang naman di sila nakasakay sa fire trucks and police cars. dito they were even asked to wear the uniforms and the helmets!

haze - most of these outings may seem so normal but when you ask the kids what they learned, that would be the time when you would realize they indeed learned something.

With my eldest daughter, they watch naman ballets, musical at museum. Plus historical sights.

Love the smile of MC with the bread she baked :)

vk - wow, adopted patintante, hahaha. thanks for the offer. i dont really know what they needed, as of now. but will call you about it. am sure may discount sa store ninyo :) a sporttasche is good.

julie - oh she's so proud of that bread, she wanted to preserve it. they get to watch special movies and theater pieces which are specially scheduled for the kindergarten kids kasi usually those things would be evening perfomances dito e.