A Laptop for MC? 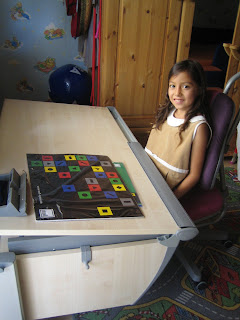 My husband is seriously thinking about buying MC her own laptop for her 7th birthday this December.

We used to talk about this, and our decision a few years back is for MC to get used to our old computer first. The old computer which has been gathering dust in our storeroom for two years now because we are saving it as MC's first computer. Because as I reasoned, that is already an old computer and it would be her way to learn and experiment with computers. No need to buy a new one.

Now he wants to buy a laptop for her. I've seen it coming, as we brought MC's study table the past month and he avoided those tables specifically made for computers.

I actually love MC's study table as it could be adjusted according to her growing years (and I hope it would really stand up to the quality and the price); and the chair is also an item that could be pulled down to her small size, other chairs could only be adjusted until a certain low that isnt enough for my little girl :D, plus it has a naturally wobbly 'consistency' that could cope to the never ending wobbling of my energetic girl.

Going back to the computer, my husband's been talking to the experts about buying MC's laptop. Their first recommendation is for us to stay with her during the time that she would be allowed to surf online. And that if no online work should be done, we could shut off the connection and of course, add those programs that could block undesirable sites.

Well, I dont know.... I am still a bit skeptical about the idea. I think it is too early for MC to have her own laptop over her own new computer. I would say the old one would do first.
Posted by raqgold at 26.8.08