She entered kindergarten early 2004 and late 2008, she said goodbye as she would be going to school after the summer break.

Yes, today was her last night in kindergarten. It is a big day for us. Papa took a leave from the office as he wanted to bring MC to kindergarten for the last time.

The only thing is, IC's feverish. Thus I stayed home to tend to IC and Papa took MC to kindergarten. I wanted to share this day, too -- but IC needed me so I gave the Papa the chance to have the day.

I already told MC that she would need to pack all her things as she would not be coming back to kindergarten after the summer break: her gym things, her rain jacket, her rubber boots, her pair of house shoes and whatever she's got inside her kindergarten drawer. She's already finished passing around her friendship book -- most of her friends and most of the teachers have already left their marks in the book for her. That friendship book is a great souvenir!

She's got her kindergarten folder -- enlosed inside were almost all of her artworks and crafts done from 2004 to 2008. There were also some photos especially those times when she celebrated her birthdays in kindergarten. It was funny when she opened it. For she couldnt believe she used to draw such 'kriddle kraddles' only :) 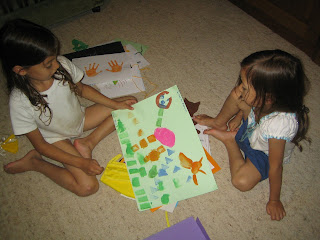 MC and IC curious about the kindergarten folder
Oh there a lot of things I need to share about her preschool days in kindergarten -- soon :)

I asked her tonight how she felt leaving kindergarten; she simply shrugged her shoulder and said, 'I dont know. I think I would be coming back to kindergarten as IC is still there.'

Well, she is right, of course :) Although she cant hide that proud tilt of her head, and that smile that says, 'I am going to school.'
Posted by raqgold at 8.8.08

Both my boys are in the "big" school and I remember when my youngest graduated from pre-school he was excited to be going to the school of his "kuya".