Watch out for Those Egg Surprises 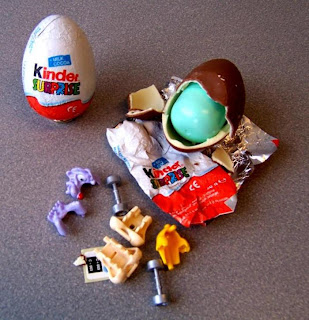 I dont know about you but I am really surprised with what I just learned.

I was opening my email when I glimpsed the news about the possible banning of Ferrero's 'Überraschungseie' (Egg Surprises) from stores in Deustchland.

For those not informed -- Egg Surprises are chocolate eggs that have hidden suprises placed inside an oval shaped capsule. Since the egg is small, about the size of a hen's egg; you could imagine how small the toys would be. Most of the suprises are even needed to be assembled by an adult. And though the label states the egg is not suitable for kids under three years of age, guess who gets to receive most of these eggs? Yup, those kids who arent supposed to be playing with those tiny toys that are really chocking hazards.

In fact, I am guilty about giving these eggs to the kids, too. Since these eggs are arranged mostly near the check out counters of most stores; the kids could easily sneak in a piece or two; just a short question, 'mama, would this be okay?' And a short nod; they've got these chocking hazards in the hands. Never really thought about that, arrrgh!

I tried to research for an English version of the news and found this. I was really shocked to learn that these egg surprises have been banned since 2006 in the US. And why are they only banning this favorite thing in Deustland only now?

Apparently because of the new EU rule that bans a mixture of food and toys in one package! Not really because of the hazard it possess. That means, no more toys inside those cereal boxes, too. And yes, be informed: it is not only Ferrero who sells these egg surprises as you would also see them as Sponge Bob, Kim Possible, Hello Kitty, Barbie among others.

Well, I have enough. I used to add these eggs as extra gifts to kids and even as loots and as prizes for birthdays; but not anymore. I hope you are warned, too.

Hey my kids are into this Kinder and they're not after the chocolate at all, they are after the toy. Some on the toys we gather I put it in our Christmas tree ;) !

BTW, I am glad PMN is working, I still have another post I made long time ago, i don't know if you need to edit it. Please email me your address at hggiraldi@yahoo.com ! You told me that you want to post something I made for travellers :D !

At the main door of my eldest son's school(both day care and kindergarten), a warning sign is posted - Strictly prohibiting these "kinder toys".

haze- my kids dont eat the chocos, too - they would rather find the surprise first. i hope you got my email?

lovelyn - these kinder toys are from italy, right? i dont know why they are doing this thing so late!