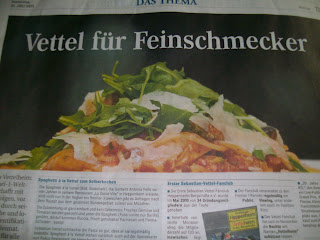 I read about it in the local paper. And I am sharing it to you, too.

Imagine sharing the recipe for his famous Spaghetti a la Vettel?

A little backgrounder. Sebastian Vettel, this season's number one Formula 1 driver, is from Heppenheim. Heppenheim is where Follo's La Dolce Vita Restaurant used to serve Vettel's favorite dish for the past four years.

Follo's Heppenheim branch has closed this past year. But, Follos Restaurant in the Hemsbacher Wiesensee still offers Spaghetti a la Vettel. A note: The spaghetti would be pulled out of the menu card for sometime if Vettel lost a race.

Cook the spaghetti per package instruction and put aside. Stir fresh herbs, spices and tomatoes in a pan. Add the cooked mixture to the spaghetti. Serve on a plate and top with rucola, shaved Parmesan cheese and shaved Parma ham.
Posted by raqgold at 25.7.11