Mama, is this healthy? 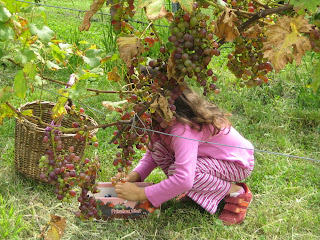 MC has been pestering me with this question since last week, everytime she's got something to eat on her hands or she sees something on the table. 'Mama, is this healthy?'

I know that they would be starting a nutrition program in kindergarten, so I have to be careful with my answer. I told her that most food are good for us, for as long as we dont overeat. Good thing, too, that they were on a fruit diet last week. They snacked only on nectarines, apples, pear and grapes. But of course, they get the regular meals which include pasta, rice and bread.

Oh well, the kids were both nursing cough and cold last week, too. But since our doctor is a naturopathist, it was also easier to explain to her that the medicine they were taking in to cure their cough and cold are only coming from natural sources, from plants and herbs. Thus, healthy.

I was a bit sceptic to bring the kids to this doctor, because he is not a pediatrician; but after what happened to MC during this particular visit with her pedia, the trust wasnt not really there anymore. Since my husband and I are satisfied with our relations with this naturopathist as our doctor; we asked him if he could handle the kids, too. He agreed. For the girls' first visit, he simply talked to them, introduced himself for them to get used to them. An added attraction was the candy container right in front of the reception hall! Now, they cant wait to go visit the doctor!

Anyway, back to the nutrition program called 'Komm mit in das gesunde Boot' (Join us in the healthy boat). The kindergarten would be doing this from October 2007 to April 2008. The kids would be rediscovering food and drinks together. They would join in grocery shopping, preparing and cooking/baking the food, to setting the table, and until eating/drinking together. They would even visit the neighboring farmlands to learn where most food come from. And, they would be introduced to exotic dishes from other countries! The program sounds like an adventure.

It is interesting to note that each parents would also be asked to be present in one time or another. I am already eager to join them. And my husband warned me that I might be asked to cook for them. Oh yeah, Filipino food in kindergarten? Why not?

MC's group would be starting with the program tomorrow. Her first assignment? To bring 2-3 different kind of food. And she particularly asked for rice, pasta and some fruit. Well, she'll get those too!
Posted by raqgold at 8.10.07

Your MC is learning fast about eating healthy. That's is good because they are the next generation. They should learn that organic food is best for them. That's great cooking Filipino food for Kindergarten, huwag lang maglagay ng patis at bagoong. hehehe.

Wow, Raq, that is really cool. That is what I call practical learning, knowing about the food and where these came from as well as how healthy these can be. Here in the Philippines, children are becoming unhealthy due to junk food that are cheap and fast food that can be had every other block, especially those who live in the cities.

What are you planning to prepare/cook?

good for your daughter - she's learning about healthy food early in life :)

Nice photo for a blog :)

julie, junk foods and fastfoods are not so popular here kasi e. tapos my husband is not a fanatic of those things kaya di rin exposed ang kids. when we go to mcdo that's because it's my treat, hahaha. i am planning to cook spareribs na sopas kapag malamig o kaya naman chop suey :D

liza, you are right about that. exposed sila earlier esp because of our fruit and veggie garden.

Lucky kids! Love the garden by the way. :) Gotta agree with julie. the come on of fastfood and junk food is too strong here in Da Pinas. I try to make up by cooking and baking stuff at home rather than buying them from stores.

Interesting. It's good that they do introduce the kids to what are healthy options. In my son's nursery, even with all the talks with nutrition I still do not agree with their sweets policy.

Let us know what you'll cook for them ha.