The Tooth Fairy Comes Only Once? 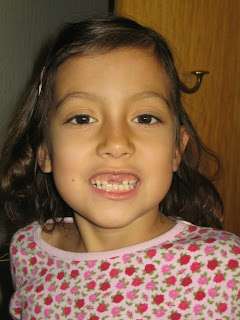 MC's recently lost her two front teeth, only one day apart. Those moments where the highlights for this week, of course. She's been playing with those loose teeth for a few weeks now; and when they finally gave in to all her tugs and tongue playing, she's real happy and very proud.

She had to inform almost everybody she's met that she's got the 'growing up gum holes'; with a sweet smile. Not to mention the telephone calls to the relatives and friends, even burning lines on international calls, with a smile, too; as if they would really see her lost front teeth.

I was in the toy shop yesterday when I met with an acquaintance. I already got the tooth fairy gift for MC when we got to chat. She told me that she wanted to stop this thing about the tooth fairy with her daughter, but then through stories from friends and in kindergarten, she had to give in. But she explained the tooth fairy leaves a gift for the first tooth only.

Now, that's a great idea. But these are now the 5th and 6th felled teeth from MC, what shall I do? I tried a simple explanation: by telling her that the 6th tooth would be the last visit from the tooth fairy because other children should also be taken cared of. MC accepted that.

And today, she came to me with this question: but why is that that A got only one gift from the tooth fairy? That was the daughter of the woman who I chatted up with yesterday, haha! Well, I told her, then consider yourself lucky! I got a smile for an answer.

Now I am trying to introduce to her the song that goes 'all I want for Christmas is my two front teeth' :D
Posted by raqgold at 10.10.07

Growing up, we didn't have a tooth fairy. My lolo introduced the concept of a "daga" who would replace our lost teeth with nice, new teeth. Whenever a tooth fell we would go to the garden, turn around and whisper, "Daga, daga..bigyan mo ako ng magandang ipin." and then throw the tooth over our shoulder. Presumably the daga would pick it up and send it to "tooth heaven" and deliver the replacement when it was available :)

My son just turned 7 and I am sure his front teeth will fall soon. He actually likes this bec he knows he will receive money. I think this will be the last and will tell him the truth.

Raq, what a great way to explain to MC about the 6th tooth only limit.

When I was little my mom would take me to the dentist to have my loose tooth remove and the dentist would then removed the neighboring tooth to make way for the wider permanent tooth. The one time that I didn't tell her about the loose 2nd molar because I was scared of needles, true enough it grew in crooked because there was no room for it to grow. But since it is not visible I was spared from the braces. This might be something you might want to watch out for.