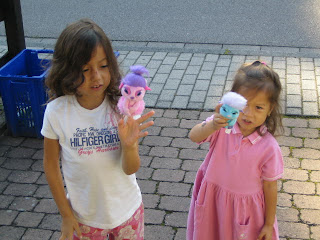 Photos: The kids showing off the tooth fairy's gifts 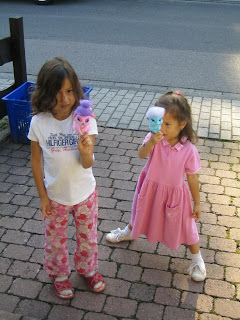 I didnt know that when MC's first milk tooth decided to let go simply because the permant pushed it out. In the morning it happened last April, it was only partly loose and MC was proudly calling people on the phone to announce her loose tooth. Then early evening, she decided to try on biting a hard gummi bear; then the tooth went smoothly out. The little blood shocked her to tears; but in a second, she was again on the phone talking proudly about her freed tooth. Papa panicked, he simply cannot find a milk tooth box to give MC after work that day!

MC was appeased only when I told her about the tooth fairy; that she can place her milk tooth under her pillow and make a wish. This new job was so exciting for her, she was already asleep when papa, empty-handed, came home from work.

The next morning, I already placed the gift that was supposed to be from the tooth fairy, on her sit on the breakfast table. I have to thank my treasure box of goodies again for this. She was so happy; she insisted on bringing her tooth and the gift to show off in kindergarten. I said no, of course. It was really a big deal for her because she, as a five year old, she accomplished what other pre schoolers have been waiting for -- the big occasion of a loose tooth! Oh, she was the hit that day in kindergarten.

Since then, she's been waiting for another tooth to fall off. And it happened last Thursday. She proudly showed it off to us, before running off to get her milk tooth box. She called the people that mattered again, to announce the wonderful news. And then excitedly placed her small box under her pillow, ready for the tooth fairy's visit. She said she wanted a hamster, but the stuffed variety. I took note.

Early the next day, around 6 am, she came running into our bedroom; crying with utter disappointment saying 'I did not get anything from the tooth fairy.' Oh no, I completely forgot about that, I am not ready with a gift! While papa took her in his arms, I gave her a kiss and soothed her by saying 'maybe you needed to search longer.' I hurried to her room pretending that I would help her look for the gift.

Good thing I have these two cuddly creatures from Barbie Fairytopia which luckily looked like hamsters. I am supposed to be saving them for another occasion; but I guess, this is also a special occasion, right? I readily presented the still in plastic items to MC. She beamed with happiness, with the hiccups of tears in between. I stressed that the tooth fairy told me that she must share the cuddlies with IC. She generously shared and cannot resist to ask me where I found those things. I simply smiled and said 'mamas would always know where to look.' If only mama's would always remember, too!
Posted by raqgold at 22.7.07

Oh it's a good thing that you had something hidden and the tooth fairy was able to send something to your little ones.

KK -- i have this secret treasure box, for just in case scenarios like this one!

hehehe! ang cute naman ng milk tooth box. I talked to some moms in my class and they do the same. I definitely will remember this when it's my daughter's turn. Thanks for the idea :)

this would then be an exciting tradition for the family!