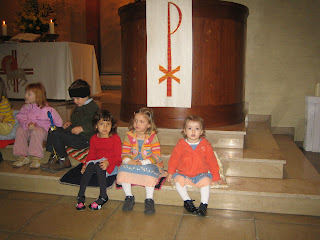 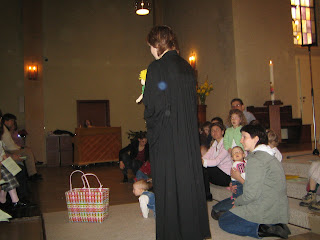 When I was a captured audience during my latest visit to the spa, the owner and I prattled on and on about the church. Not the heavy religious talk, mind you. We were more on exploring the practicality of religion.

We both agreed that we wanted to stay a Catholic because the children needed some guidance about their faith. But she is a bit sceptic about the old fashioned traditions being kept within the Catholic religion. She admires the adaptation of the Protestants into the changing world. But we both said, as long as the religion preaches the good, then we are both satisfied.

Now, let me explain why I am more present at liturgical celebrations of the Protestant church.

Number one, because my kids, although both Catholics, are both enrolled in a Protestant kindergarten. (My husband is Protestant though.) We are active in all of their kindergarten activities, therefore, we are bound within the Protestant traditions. Though I dont find a lot of difference, really.

Number two, the Protestant church offers a mini-church (mini-kirche), once every month. The mini church is a hit to all families with small kids. Cushions are available for both parents and kids, they can choose a place along the altar stairs or sprawl themselves on the floor or seat on the benches -- whatever they want. The priestess (yes, they have a woman priest) would celebrate the mass standing in the middle of the crowd. There would be a lot of singing and interaction. The sermon would involve storytelling, complete with figurines or sometimes, the kids would be asked to help play act the scenes. The mini church would always start with a song greeting everybody, everyone mingles and says hello or shake the hands. The mass would end with another song, wherein everyone must hold hands and create a big circle. All of these activities last around 20 mins -- just enought time for the kids to enjoy and not get bored.

Number three, the Catholic and Protestant Churches usually holds ecumenical masses. That means, they either use the Catholic or Protestant churches, to celebrate the mass together. Both the Catholic priest and the Protestant priestess would be in the altar, doing the services.

The first time I joined a mass celebration here, I thought, why am I in the wrong church? My husband drove me to the Protestant church, but he assured me that the mass is being held there. He never bothered to explain to me that there exists ecumenical services. That confused me to the point that I never went again to another service until I found out by myself -- that ecumenical masses are normal here. Through these ecumenical services, I lost the distinction between Catholic and Protestant.

Going back to my discussion with the spa owner, she was telling me that she and her hubby are both thinking of divorcing themselves from the church. That made me wonder, before I realized that here, part of their income goes to the church. I explained to her that the Philippines enjoy a good percentage of Catholics -- but since we dont have to pay for anything to be a Catholic, then leaving is not a consideration, unless one wants to join a different church.

She revealed then that it is amazing how many couples with kids here, have already divorced themselves from the church. For the simple reason of practicality -- they are saying that the money going to the church is enough to bring them to a great vacation or buy them new furnitures.

I dont know, I havent thought about that. Should you give up your belief because you wanted to enjoy your vacation or to have a comfortable sofa? I think, it is a bit extreme. But I am not here to judge, I am just wondering.

I asked my husband for his opinion. He surprised me when he said that he also once thought about giving up the church because of the money, too. Into which I responded, 'I am glad you stayed. The kids needed their faith, too.'

I am a shocked. Exchanging your faith for a bit of luxury? Where is the world going? Help!
Posted by raqgold at 4.7.07