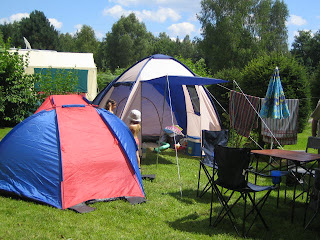 Wednesday morning started as chaotic as expected. The kids wont eat breakfast and was ready to go in a few seconds before I can say 'good morning.'

My hubby, a veteran camper, almost knocked me off with his nervous energy: Mein schatz where is the bla, bla; did you pack the hohum, dont forget the uh-oh, will you please make sure that the hush-hush is ok and the la di da la lala goes on until I decided to lock myself in the bathroom and read my mystery novel, haha! When I tell you about 'locks' in our home, this simply means closing the doors as we have more or less misplaced the keys in almost all of our doors (except the front and front-front doors).

Noticing that I was not responding anymore, my hubby decided to check and re check and re-re-check everything. The kids, meanwhile, were already inside the car, waiting! Oh well, after a few pages, I packed the novel in my bag and joined them. Cool mama is back. Time to kick off for our 110 km drive to Odenwald Camping.

At my request, we had to pass by the kindergarten to drop the farewell gift of the kids to a trainee. And then, off we go to the next stop, the bakery. Wheeeee... Actually that was not wheee, it was munch, munch, munch. I gave the kids a pretzel and hide the rest of the bread pack in the back of the car. Because not long after that, the kids were already asking for more, my husband, the weak king, found a spot to stop, for me to get more munchies for the kids. And I, the very weak queen, joined with the chows, too.

MC took a few anti motion sickness homoepathy balls before we left home so I was not worried about her. IC doesnt have a history of motion sickness, that was before. Because IC began acting up an hour after we took off: whining to go home, wants to sleep but was so restless, and then she started those deep, deep sighs. She already vomitted when I turned to look at her.

Papa immediately stopped in the parking lot of a grocery store. IC was out in a second and hubby was already busy wiping and cleaning the mess. IC was calmly watching everything, her only concern was to get out of her dirty clothes; which I did in a hurry, washing and wiping her at the same time. MC concentrated on the stuff toys, I didnt think she would want to touch the mess at all!

We arrived at the camping area after 10 minutes. The kids, forgetting the disaster (though not the smell) were already jumping in glee as the swimming pool greeted our entry. We hurriedly found our camping space, right before the playground, with clapping approval from the kids. In an hour, like the amateur turning fast into profi campers that we are: the tent was up; the kiddie tent standing, the seats and table and other camping gears already set. Happily, we left our camp to have a dip in the pool.

This is a kid-friendly camping area and we are happy to find that they have an Animation team. They have activities lined up starting at 11 am until 4 pm. Not to mention the kid friendly pool, the bouncing castle, the always available chalks, the kiddie films, creating art works together, etc. For moms and dads, they also have the big fitness studio, the sauna, the cocktail bar and the luxury of free babysitting because of the Animation team!

At 7 pm, the kids were still too excited to slow down. While my husband and I tested our new cooking gear, we could hear the kids screaming in the playground. We had dinner, and then papa went with us to the sanitary facilities; him to wash the dishes and the kids and I for a quick shower. I read a bit for them before the sandman caught up with them. I had a short nightcap with my hubby before we called it a day, too.

The night was a surprise. The day was not so quiet, but the night, wow! You could hear a mixture of sounds: from the song of the nearby brook, the birds whistling, the highway traffic, the swooshing of the leaves, the creaking of the airbeds, and the human bodies'
normal puffs, if you get what I mean! Grabe! I cannot hide my laughter after a few hours of these symphony, good things the kids were sleeping deeply. I guess I fell asleep with my smile frozen on my face.

The second day came earlier, as predicted. The kids simply wanted to get out of the tent as soon as possible -- we repeated the same activities from yesterday. Only, we ate more -- more ice cream, more french fries, more chips and cookies; drank more, too -- a bottle of red wine between me and my hubby, cokes and water and ice water lollies :-) But the night time left us with a puzzle, should we stay for one more night despite the threat of rain? We decided to sleep on it. I slept like a baby being cradled again by the jazz tunes of the night before.
Posted by raqgold at 28.7.07

What brand of homeopathic medicine do you use?

Darn the weather, sayang your trip should have been much longer. Natawa ako that you had to drive by the pool to prove that nobody was swimming, hehe.