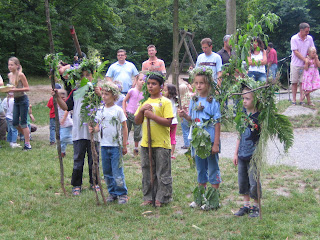 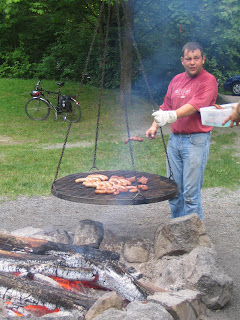 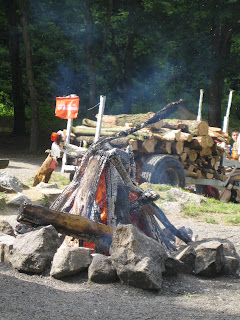 Photos: The kings and queens of the jungle; the big grill pan; bon fire

Last Friday was grillfest in kindergarten. It was done in a big party hut located in a clearing in the woods.

We were lucky that the weather cooperated. Most of us were checking the forecast every minute the morning before the barbecue party was supposed to take off -- because the day before, the gloom news was saying it would be a stormy day.

It was a fine day! Most of the kids with their whole families came. Kids got the space around the clearing to play, of course, the playground is already full. MC disappeared with her friends in the woods for a long time; they just come every few minutes, huffing, to report what they saw or most possibly, imagined. Such stories as 'we saw a wild pig, but it run so fast before we could not catch it; we saw some blankets and clothes in one corner and we had to run because juliane, a friend, saw the man holding a sword threatening them, etc.' Amazing how they can create such stories, and they all talked along the same lines, too. Hmmm.

Then we played some games, each group were asked to perform a task. It was another fun time for the kids as the moms and dads had to play with them, too. We had to scour the woods to finish the game. In the end, we needed to create a costume from nature for our chosen king or queen of the jungle.

Then came the farewell program for the pre schoolers. Singing, poem reading, and gift giving; the highlight for me came when it is my turn to sing with the kids three English songs which we practiced together. They turned their happy faces to me, then started to proudly sing and gesture with enthusiasm. I didnt notice that both my kids were also with me in the middle of the performance :-) They wont let me go. But the pre schoolers did great, as they told me, they also practiced at home! I received a small token from the parents of the pre schoolers; but the real gift for me was the words of most of the parent's of this coming year's pre schoolers -- 'it would be great to know that you would be offering this playtime English again in kindergarten.'

Now for my husband, he's also too excited, even a little nervous for me. He's been urging me, since we arrived in the hut, to let him know when the 'greatest performance of my life' would start. He's one preening husband that night :-)
Posted by raqgold at 23.7.07

schrooch --- we got lucky with the weather talaga, we had fun!

christianne -- my hubby was really nervous the whole time before my performance, naks -- what i sang with the kids? my toes, my knees; butterfly song; and the one, little, two, little tree -- kiddie karaoke, hahah.