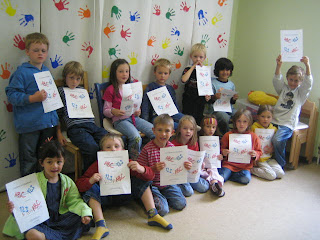 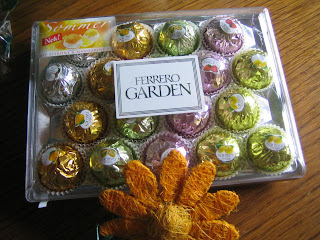 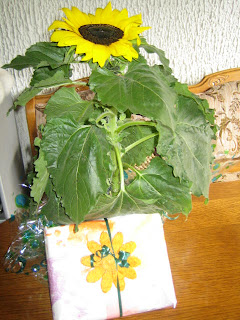 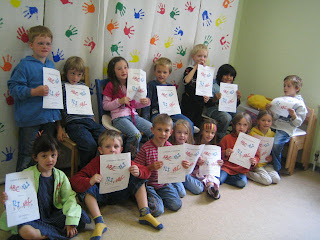 Photos: The pre schoolers and my graduation presents from them: a sunflower and a box of chocolate.

My first class of playtime English for pre-schoolers in kindergarten 'graduated' last 13 July. It was a baptism of fire for me, volunteering to facilitate this course. I have dabbled with teaching, too, such as an interrupted semester as real green instructor in AMA College and as basic English teacher for our hotel staff in Bangkok; but with kids? It took me at least a year to finish the program and to build up the courage to offer to facilitate it.

I had to confer with my husband as I seek his loving push and rely on his confidence on me; to explore it through loads of readings via internet and books; to feel the readiness of the environment by talking to parents of kindergarten kids; and finally, to create the program and research for the appropriate songs, rhymes, games and activities. Whew, it was not easy, but it was something to do for me. It took my mind from some crazy phases I was undergoing -- I guess I went a bit loco with the thought of nothing to do as IC was scheduled to begin kindergarten that time. And then, mama would be home alone.

I was ready to give in to homesickness during the time, when one of the teacher's in kindergarten suddenly asked me, 'now, what would mama do when both kids are in kindergarten?' That woke me up. The reality is, I am not feeling sorry nor homesick at all. I am actually already half enjoying the laziness curling up into my bones; imagining the lazy and quiet mornings without kids. Already wanting to realize it with a vacation in Manila, even.

You would have thought I would savor those first few morning alone, but nope, that is not my style. I needed to get going or else I would forget myself. My sleeping brain needs to wake up, my lazy limbs just gotta move along.

Thus, I approached the kindergarten's director and presented my half baked ideas. Known to be someone who doesnt agree immediately to an idea, I heard she needed to sit on it for a long, long time, that is if she didnt end up forgetting about it at all -- she nodded and smiled in agreement. Ooops, that smile felt like a trap at that time. I was elated but really apprehensive, and though winter, I sweated on my way home!

That short meeting pushed me gleefully to an optimistic start, I finished the program in no time at all. I presented it, was approved, and I had to wait for two weeks for it to be introduced to the parents and the pre schoolers. Lots of people approached me when they heard about the plan, many asking me to try to include the whole kindergarten! Uh-oh, such warm welcome I didnt expect. Even the director had to put a halt on the suggestion to create a special session for the younger kids, we need to start first. To which I agree...they are making me nervous with such high expectations actually!

I was enthusiastically reading and practicing my course plans to my kids. I needed to know how it would click. For those that did, I was happy; and when it too boring for the kids, I had to feverishly redo it. My girls were so excited that mama would be a 'kindergarten mama' soon.

My first class was unforgettable for me. There sat the kids, waiting for me, with big eyes. Beside me was one of the teachers from kindergarten (we agreed to have one of them with me until the kids have won my trust and of course, as they would need to translate a bit). I greeted the kids in English, 'good morning' and most of some answered me with 'du bist MC's mama' (you are MC's mama). I said yes and that I would be their English teacher, too. That established, we began our first lesson -- teaching them the 'good morning song' which then served as our starting point for the whole lesson. With the morning greetings, there must be a way to end the session, thus I introduced the 'Goodbye Song', too.

It was amazing how the kids learned so fast. One of them is undergoing speech theraphy but he was coping as fast, too. I was having fun, and most importantly, the kids were, too. Everytime they see me, anywhere at all, they wont forget to greet me with 'good mornings' and 'goodbyes'. Who was it that said 'teaching is a fulfilling job?' I agree. I am definitely going to be doing this for a long, long time.
Posted by raqgold at 21.7.07

Di ba nga sabi..teaching is a noble profession. I admire your perseverance...tiyaga mo :)

Wow! You are very patient for teaching pre-schoolers.

scrooch and KK -- i only discovered patience when i became a wife and when i had my two kids, otherwise i am also sooo impatient. plus, i am enjoying being with kids!