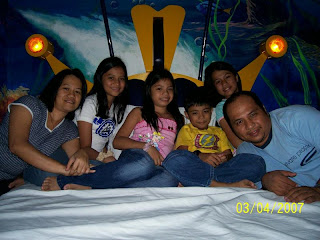 Photo: My sister (far left) with her whole family

My sister turned 37 today, another Friday the 13th celebration for her. Her birthday, falling on a Friday doesnt bother her anymore. What is important for her is that the whole family is with her, healthy and happy.

I am devoting this blog on her. For I am sure, despite almost daily chatting on YM and the occasional phone calls and letters, she doesnt know what I really think of her. The best things only, let me assure you. I need to go back a bit though...

Jo-anne is one year younger than me, I am the eldest in a family of five siblings. She was the first one to get married, at 23, because she was already pregnant with her first child, Cha. There were tensions in the family during that time, not only because of her condition, but because the family of her future husband then, was not really in friendly terms with our family. Ala Romeo and Juliet, but not so violent. With my father's suggestion, she ended up living in with her future husband, though they got married a few months before she gave birth. Nanay, as a mom, cannot stay away from her pregnant daughter; but my father avoided being in one place with the family of my sister's husband.

As expected, that changed when the little 'apo' came to the world. When another apo and then another and then another (they now have 4 kids) joined the family, the frigid relationship thawed to what it is now -- in hot and solid friendship. It took time, but the important thing is, they are now 'mares' and 'kumpares'.

My sister dont know this, but I admire her for the strenght she displayed during those years. Imagine, young and pregnant; and knowing full well that both families are not even in speaking terms. I even cried a few bucket of tears for her; she dont know this of course. Being the eldest, I wanted to be the stronger one. But I did try to be there for her during those long years.

What pained me though, is that, I missed her civil wedding. My mother knew about it, but since she's cannot also attend, it pained her more to let anybody else know -- thus nobody told me. I only realized that they got married when I saw the birth certificate of the first child. It was not a good feeling especially when the mentioned that they thought, I knew, but that I cannot come. If I knew about it, nothing would have stop me from being there. It is months too late, I had to hide my frustration and the guilty thought that I have let her down. I dont know what she think about that, though. I would have loved to know that she has forgiven me for not being there for her.

Then came the time that I had to leave home for a few years stint in Thailand. She, with her family, had to be there for our parents and our three younger brothers and sister. I helped financially, but my not being there, could have added more to the challenge of raising her kids and pursuing her career. Thus, I am again, not there for her. But she was strength and wisdom and calm for us in between those worlds.

Even my offer to donate blood, during a scheduled surgery for her youngest and only boy; was turned down in the hospital. At least, I was present during those testing times. Topher is now a healthy, bubbly grade school boy. I am sure she was almost at the end of her wits; but she never buckled. She was all there for her elder daughters; and is all there for the youngest and sickly boy. How she ever did that, is a wonder to me. I guess she's just being a mom; who demonstrated her patience, her dedication and her love.

Another nightmare we both went thru was in 2004, hearing my sister's voice in the answering machine at 2 am, Deutschland time. I just gave birth for a few day to IC, and was breastfeeding her that's why I was able to hear, but not get the phone. 'Ate, we brought Nanay to the hospital but she is okay.' Jo-anne became the voice of the family, sometimes scared, other times tearful but all the time, optimistic.

That ok was not really ok. Nanay suffered aneurysm and would need immediate surgery. We exchanged hundreds of phone calls -- deciding, collaborating, hearing our every breath, hiding our tears, telling stories, sometimes even managing a laugh or two -- being strong for each other; we are becoming better on being there for each other, distance notwithstanding. Nanay was out of the hospital less than a few weeks after the surgery; recovering so fast, she even skipped on her therapies!

That scare brought us closer together. We can talk now about almost everything, and what I love about having found that closeness is that, we can also laugh about every crazy things; even those that should have made us cry and tear our hair in frustration. I guess being sisters and now both moms, we have more in common than we would admit. Though I still consider her stronger than me. The truth is; I found my sister; and she is in me. I am thankful for that bond.

Ang hirap kapag malayo sa pamilya during times of crisis, like your mom's surgery; siyempre hindi pa makauwi kaagad because you had just given birth. :(

Happy birthday to your sis!

that's one of the few moments that makes you think why you actually left home! thanks for the greetings.