Roses and an Apology 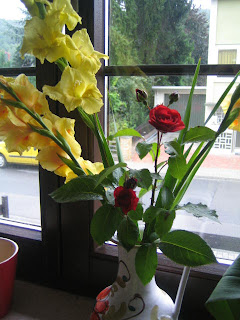 Photos: flowers for mama, the gladiolas was from MC and the roses from IC

Did you experience the 'terrible two' phase? Not me, I only know of it. My kids were tolerable twos. I never did imagine that we would go through what I call 'terrorizing three'. I went through with this phase with MC when I was pregnant with IC.

There were tears and screams and door slams as I tried to control my temper, adjust with my hormones, and meanwhile, get along with a terrorizing three. Stomping my feet with frustration was already a cool response then. I blamed my pregnancy, too.

And now, although IC turned 3 years old last April; my used to be happy and contented girl is slowly and oh so surely, becoming a terrorizing three. My mommyness is being tested to bursting point again (and nope, am not pregnant)! She started by disrupting some daily rituals: wont brush her teeth, wont bath with her sister, wont wear the pajama chosen for her, wont want to be combed, wont wear socks, wont put on the appropriate shoes, wont wear a jacket despite the cold or the rain, wont eat her food because she needs a separate plate for each dish not to mention the separate spoon and forks for each plates, etc.

And here's more: wont tidy up despite throwing all her toys around the house, wont put back the clothes that spilled out while looking for her favored pajama, would put her feet on the dining table while eating, would start cursing even though she's been warned not to say those words, would dance while atop an unstable chair in the terrace, would wildly drive her car in the kitchen while I am busy with an open oven, etc.

She would unbuckle her seatbelt while on the road, would roll down her window using her foot, would gnaw on paper tissues, would strip naked while eating, would roll out the whole toilet paper as she pee, would create a puddle in the bathroom as she wash her hands, grrrrr.

I know, we can always work it out, patience and understanding and more teeth gnashing; but it would take what it feels like hours to get her ready for kindergarten, to bed, to go down to the garden, to climb the stairs, to start a meal, etc. And of course, when threatened to be left alone and told to get ready or to eat by herself, she would wail until the whole neighborhood would be having a reason to call the police. (Nope, that hasnt happened yet!)

She understands the bad, the good. She knows the rules. She follows them without arguing. That was before. I dont know what happened. But we have a feeling, kindergarten happened. She is now exposed to a big group of kids, just like her sister before her. She interacts, mimics and would try to experiment in her own way. When before she used to tell me stories about the bad things some kids in her group have done, she's now the one doing them. I would say, IC is growing up and she needed us to shape her thinking, too.

Anyway, I am not worried about her. Just this afternoon, she joined her papa in the garden and came back excitedly calling for me; with a bunch of freshly picked roses in the hand she said, 'mama, these are for you. Entschuldigung (I am sorry).'

I took the roses and gave her a big hug and a loud kiss. I'd gladly forget the tantrum this morning; I am pretty sure, the terrorizing three phase would soon be over.
Posted by raqgold at 29.7.07

Hi Raq,
Thanks for the tag(I will work on it this week). Thank you for sharing your sweet family picture(I can see the moody little one). You look pretty with your long hair, why did you chop it?

KK -- that long hair stayed until 4th year college; when after a very irritating final exam, a friend and i decided to cut our hair very, very short. even our dog didnt recognize me :-)

cookie -- hahaha -- our kids are our comedy nights, right? i hope you got the pencil out before she got to the eraser :-)

mitch -- an angel when she wants talaga!

I think she's in the stage where she wants some autonomy on a lot of things. Which is a normal for their age. My almost 4 year old daughter is also going thru same phase. Although I let her be herself sometimes, I make sure there's limitation to it.

Hi Raquel. Oh my, I can relate 'coz I have my share of similar situations too.

Three was an age where my son went through some behavior changes and adjustments. There were times I was quite stressed and my husband would just take me out so we could unwind. My yaya who has been with me since I was a baby is still with us so I've never been concerned about leaving my son at home. Yohan is now four and he has improved a lot.

momoftwo -- you are right, they must learn the limits, too.

rach -- lucky you for having someone trusted to stay with johan aside from you and your hubby. i dont have a choice, i need to deal with her alone though i sometimes go in another room if it is really too much for me. we are both learning a lot from this, though.