A Carnival of Life 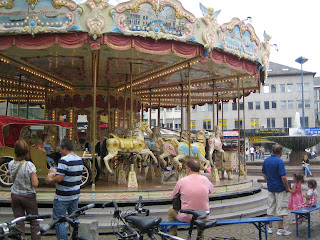 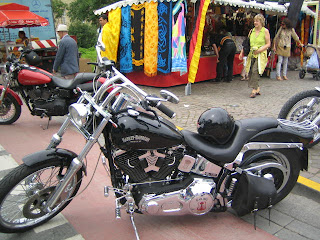 Photo: 1- Kiddie carousel 2- one of the Harley's

Yesterday, as every first Sunday of the month, was the kids' day. The kids can choose where they wanted to go. As early as Friday, both kids insisted on going swimming. I have prepared the beach bag, stuffing it with bathing suits, towels, etc. All set for Sunday. Then, I caught a cold, sniff! And I was coughing so bad last Saturday evening that papa declared; swimming is out.

On the breakfast table, the discussion - where to go? IC wanted to go swimming still, MC wanted to go to Darmstadt because of the festival - actually she just wanted to go and have her face painted! I told my husband we can go separate ways this time, in which he shook his head vigorously.

Meanwhile, MC had already encouraged her sister to come with us to the festival; because of the lure of face painting, of course. And so we went, commuting with train and buses to Darmstadt. The kids got their face painted, they took enough carousel rides to give me a headache, ate enough sweets until they got sticky themselves, plus, binged on french fries and sausages to make their stomache ache.

As for me, I saw a carnival of life:

- I noticed that more parents get to an almost fighting mood during carousel rides because of the scramble to reach the choiced seats for their kids (my husband is a member of this)
- Men would always be men. A mom, very busy tucking her kid into one of the carousel seats was wearing a low waisted jeans with her very tiny string tanga peeping out -- and I said to myself, aha! Let me check who's taking notes -- of course, most papas eyes are seeking that direction. (Uh, I forgot about my husband, tsk!)
- The same mom, still unaware? ( I dont really know), lowered herself on her knees to sit beside her kid, during the whole carousel ride. That simply showed off more skin and the whole (or the nothingness) of her tanga. The papas have a fiesta, really! I wanted to laugh out loud, but I just grinned and tried to stare down some papas. I didnt succeed of course, they are in full concentration. I wonder if other mamas noticed it though?
- I am not judging, though I want to emphasize, be aware of what you are wearing during carnivals, moms!
- There would always be people who would try to sneak out and snatch your place on the long line. I saw a mom pushing her small kid through a small fence so that she'll be next for the face painting -- that resulted into protests from the legitimate next people on the line. The illegitimate next was bumped into the end of the line. Let's be a good example here, hay!
- You should expect to be sharing a table on restaurants. Simply ask. After all, everybody in a fiesta atmosphere are in a good mood. I saw something, a man huffed and puffed, seemingly distressed not to find a seat -- then a little boy approached and told him that he can share their table. I told you, right?
- IC wont eat because she's afraid that her face painting would be 'damaged'; the same is true with most kids.
- IC and MC needed a mirror to check their appearance after having their face painted, I realized, I dont have one but I would be needing one in my bag soon, for the girls!
- Both kids paused in front of a department store mirror to examine their face, and did this in all the mirrors they passed.
- My husband saw aquiantances enjoying the festival, and shock of all shocks, without their kids. Uhm, when can we do that?
- Most of the towers around the city are open for viewing, but only a limited number of people are allowed to go in. Plus, the red cross vans are camped within their immediate areas -- afraid of a jumper? Macabre thought, sorry.
- We found an carousel for adults and a kiddie carousel, standing side by side, harmoniously. The kids can go and get themselves dizzy with the rides and the adults can make themselves dizzier with cocktails and beers. But really, the bar carousel is moving, though ever so slowly. I wonder what resulted with a few drinks -- people loosing their footing and their sense of directions, haha.
- I really craved for a crepe, but the first stall that was selling it, turned me off from eating it this time. The lady who was selling it, had finished smoking but didnt even washed her hands before manhandling the merchandise, yikes!
- We saw a meeting of the Hell's Angels from Darmstadt with their shining Harley Davidson motorbikes, although there were also the well maintained BMWs, Kawasaki's, and those Italian and French brands. The thing is, it was really fascinating to watch and to hear, vrrrom-vrrrom!
- MC learned how to eat cotton candy, not by licking it like a lollipop. How? Taking a small piece, and roll it into a ball, then into the mouth. Another thing, dont lick up your fingers every time you bring a ball into your mouth -- do it when the cotton candy is gone. Or else, you'll just get more sticky.
- Weather forecast is just a forecast. We've decided to wear summer clothes, instead of being packed up with jackets and shawls -- despite being aware of the forecast: rain and cold. Good thing , coz though it drizzled, the sun was shining and with all the moving around, we ended up sweating, too.

A great family day with a little bit philosphizing on my side, bear with me :-)
Posted by raqgold at 2.7.07

good observations that you have made--calling everyone, be conscious of everything around. be ever solicituous.

the past 3 days, i have seen those peeping thingeys, courtesy of low waist pants being used nowadays.

hi sexymom, wearing those low waist pants is an invite to peep esp since they are mostly being matched with string tangas -- or am i being prude? :-)oh, as long as they are aware, whatever...

I really love carnivals. It's the same here..regarding your observations. The shoving for space, the food, the clothes. Wish I could go soon but unfortunately, the rainy season is here so that has to be shelved in the meantime.

Did your tag na. http://scroochchronicles.blogspot.com/2007/07/what-were-you-thinking.html