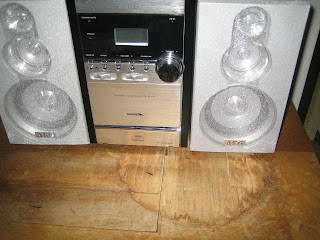 I cant believe that the kids' managed without watching television for almost a week. Just one more day and they can go back in front of the tube. I mean, they nagged me every now and then, but they got bored with my repeatitive replies of 'not yet'; and simply run off to find a way to get busy.

I banned them from watching television for one week, last weekend, as a consequence of their action. They know that the room fountain is a taboo for them, definitely not a plaything. Since they always see me pouring water with a small water can into it; why shouldnt they? MC always ask me if she can do it, sometimes I allow her. But only if she ask me first.

That day last week, they had their fun. They took turn pouring water into the fountain until it overflowed into the antique sewing machine (it was from the great, great mother of my husband) where it was standing on. The stereo beside it was also wet. But they were not yet finished. They got an old watercolor artwork of IC, poured water on it and proceeded to stamp gleefully on the puddle they are creating. Unfortunately, that room where they were having a wet party is carpetted, light cream! And IC's watercolor work is a mix of green and yellow. Should I say more?

When I heard them shrieking with bliss, I decided to investigate. Can you imagine my anger and frustration on seeing the mess? Their feet were green, as the carpet is now green. They were wet, as the carpet and the whole area where the room fountain is wet. Aargh! I immediately grabbed some clothes nearby, telling both girls to dry their feet off, and told them to stay sitted while I run to get some more towels. I gave them hand towels that are wet and soapy and instructed them to rub the color off the carpet. They got busy without a word. I tried to save the sewing machine and the stereo by wiping them off dry. Sewing machine's wooden table is damaged, it was too wet; the stereo is still working.

I left the kids with more instructions to try to remove the color off the carpet. They scrubbed and rubbed, quietly. When there is nothing more that we can do after 15 minutes, (more wet spots around and of course the color remained) I gathered the kids in my arms and lectured.

I repeated the rules: that the room fountain is not a toy; that they should always ask first. They both said nothing, I told then what happened with the sewing machine; and pointed out the spotted carpet. Asking them if they think what happened was good, they shook their heads. I guess they were having fun playing together that everything became a toy. I had to tell them the consequence of their action: no television watching for one week.

Oh, they come and ask about watching tv, trying to confuse me and cajole me sometimes. But I didnt give in, after all, the glare of the green spots in the light cream carpet is still very much there. And I dont want to think about the sewing machine.

Thus, it was almost a week of being creatively busy for them. They played in the garden when weather permits, their drawings and artworks piled up faster than never before, they got interested with jackstones, they took turns reading books for each other (as if they can already read), they create ballet and puppet shows for their dolls, they came up with a cave using a thin blanket and loads of clothing pins, etc.

I therefore conclude that the consequence gave me an idea; declaring a no tv day or days would be our creative day or days. Not that they stay long in front of the tv, they are also limited to at least 2-3 hours; but not in one sitting. I would have to talk to the kids and the papa about that, later today.
Posted by raqgold at 13.7.07

i will try to post a photo of the sewing machine, permanent na sya kasi natuklap na e :-(