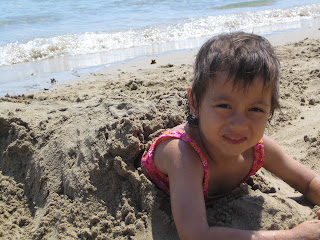 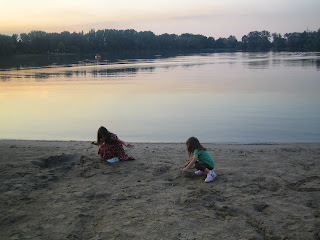 Another hard rule that the kids follow is never walk the streets barefoot nor explore a strange area barefoot. In our garden is not a problem. But running along the streets or playing in some strange sanded area barefoot are big no-nos.

This decision is influenced by a bad experience we had in 2005. MC joined a playmate and her mom to play in the sea near our place. While playing barefoot along the sandy shore, she stepped on a used injection (syringe) needle.

The lifeguard sprayed disenfectant on her foot but it was not treated as something alarming. When MC got home, she was whimpering and haltingly told her story. The first question that her playmate's mom asked was if she's got a shot against tetanus. Oh, yeah, she's got those and more.

What I understood was that she stepped on a nail (in the German language, nagel is nail; needle is nadel); I didnt realize that there's a big, alarming difference between stepping on a nail and an syringe needle.


It was two weeks after that incident happened that we got the story cleared up. During the barbecue party from kindergarten. The kindergarten adminstrator casually asked us what we did after MC stepped on the needle. Oopps, now I heard it right. That was NADEL and not NAGEL. My husband panicked. We almost didnt enjoy the party; we simply wanted to go home to quiz again MC's playmate's mom on what really happened. And when we did, the culprit was an injection needle.

Stepping on a nail is one thing, but on a needle, from a used injection? That was really bad news. It got our imagination running: what if that needle was used by a drug addict or drug addicts? Would she be infected with hepatitis? Would it be HIV? My husband's horrible imagination got the best of us. I tried to calm him because in doing so, I am also calming myself.

He called for a doctor appointment immediately. The very next day, we were at the doctor's office. The doctor quizzed me. He noted that it would have been best to secure the syringe so that it could also be examined; but who would have thought of that? Now we know, but it's too late.

MC underwent a lot of blood tests; the doctor and the nurses had to put gloves to do the tests, which they never did before. But I ignored the implications. I stubbornly keept my faith and optimism. I had too or I would go crazy. It is enough that I am seeing my husband worrying himself crazy. My family needed me.

After a day, the blood tests came negative for hepatitis, that's good news. But they wanted to do another blood tests for HIV. To make sure. Wow, that rattled us a bit, more than a bit actually. It almost killed us.

The day we got the test result was the day before our long awaited vacation to the Spanish beaches. The vacation should have been an exciting prospect, but because of waiting for the unknown, we simply cant focus on the fun awaiting us. The girls were happy, though. We tried so hard to be as normal as possible, though our thoughts were chaos.

We also had some guests from the Philippines who had no idea what kind of torment we are suffering; the wait was simply torture! If I could do something to ease the torment, I would do it; but all I can do was wait and keep my faith.

And then at 4 pm; the call. My husband got the phone. He took the call in the kitchen, and after a few minutes he came back and gave me a long, tight hug. He was already crying when he said, 'it's all okay.' Whoosshhh... I could faint with happiness. What a relief!

Nope, I didnt cry when I heard the good news. I felt real joy. Like maybe winning the million lottery so many times over. Our friends were really confused because my husband was crying and I was cheering. That was when I told them the story. That was when I cried. And that's why, never barefoot!

And our Spanish vacation? It was a dream!
Posted by raqgold at 3.10.07

OMG nakakatakot nga yun! Glad it turned out to be nothing, don't want to imagine what could have happened if the needle was infected...

Am glad that turned out alright. I never let my kids go barefoot too. They are either wearing rubber shoes or beach slippers or swim shoes. There's a playground near us where most kids go barefoot in the sandbox. Sometimes these barefoot kids bother the kids who wear shoes by calling them Mr. or Ms. Rubber Shoes and say that they are dirtying up the sand. Wala kaming paki. Better bothered than sorry.

I don't even want to imagine what you must have been feeling. Thank the good Lord that everything is all ok :)

Hi Racquel, am so terrified while I was going through this post and am so relieved when I've read about the great news. Grabe, kahit ako, ma-paranoid na sa ganyan situation, baka di nako matulog while waiting for the results. Thank God talaga your kid's ok...That reminds me, not to go barefoot again even in our veranda or garden (we have not-so good neighbors & our fence isn't high enough).

Oh, my! I'm so glad to hear things turned out all right. What a terrifying experience.

thanks for sharing this raq. now, no more barefoot louna at the playground anymore.

i was just imagining the scenario and i think it would be me who'd panic, not frenchguy.

Raq, that must have been a terrifying experience, thinking of what MC might have gotten from that unfortunate accident. I'm so happy the results were all negative and MC is doing great.

This is a great eye opener. Thank you for sharing it with everyone.

angelica, you are right to keep that shoes on rule. we'd never know what's inside that sandbox esp if it's a public area.

cookie, those were the times when i simply floated on the air and stayed on the ground with my belief that everything would be okay.

rowena, you simply need to be vigilant. kami everytime we go to a strange place, we make sure to go around muna. paranoid but we simply want to make sure.

daisy, i dont want to go through that again!

rach, we are really relieved when we got the result. unimaginable relief, that was.

When I was in college, while walking back to the dorm, I was attacked by a crazy lady. I panicked and I cried because I thought she attacked me with a syringe needle. During those times, stories that some HIV infected persons are attacking people in movie houses with HIV infected syringe. Anyway, it turned out, she used a ballpen and not syringe. That is a horrible experience.

this post reminded me of the poem, The Night I Heard Caruso Sing, a piece about a parent's dilemma, ahehe...