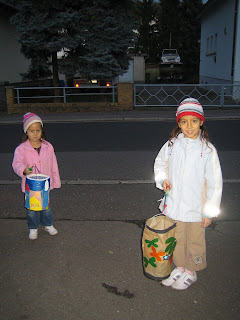 MC and IC proudly showing off their lanterns
It started with the creation of the laterne (lantern) in kindergarten and followed by a singkreis (sing circle) in kindergarten last week. The parents or grandparents were invited to come for a fifteen-minute singkreis with the kids and their teachers. We learned at least three new songs for the Sankt Martinsumzug (St. Martin's procession) and of course, repeatedly practiced the traditional and more popular St. Martin's songs.

The kids received their Weckman, a bread made of yeast dough and raisins formed like a ginger bread man. These are donated by the city.

The kindergarten celebrated St. Martin's Day with a short reenaction of St. Martin's life, led by the pre-schoolers. 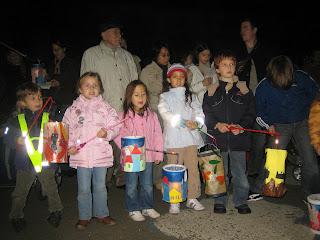 here are the kids watching the reenactment with their lanterns on display
Then the highlight of the evening, the arrival of St. Martin on his horse which signals the start of the procession. The procession glowed with lights from the children's lanterns and cheered by the St. Martin's songs. 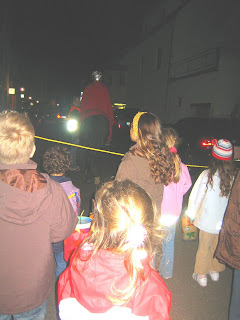 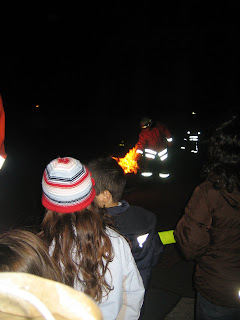 Oh and the second highlight of the night? The Bengalisches feuer (flare lights) that were always prepared and executed by the volunteer fire fighters.

After the spectacular display, most of the kids and their families retired to the kindergarten where bratwursts and glühwein (mulled wine) were served as the kids played and the crowd serenaded by the Posaunenchor (trumpher choir).

What is St. Martin's day? According to about.com :


November 11th is a special day in the U.S., Canada, and German-speaking Europe, but when North Americans are observing Veterans Day/Remembrance Day, most Austrians and German Catholics are celebrating a different kind of holiday. The Feast of Saint Martin, the Germanic Martinstag celebration, is more like Halloween and Thanksgiving rolled into one. Martinstag or Martini commemorates Sankt Martin (c. 317-397), Bishop of Tours, one of the most revered European saints.

The best-known legend connected with Saint Martin is the dividing of the cloak (die Mantelteilung), when Martin, then a soldier in the Roman army, tore his cloak in two to share it with a freezing beggar at Amiens. Today in many parts of Europe the feast is still celebrated by processions of children with candle-lit lanterns (Martinslaternen - see the German children's song "Ich geh mit meiner Laterne") and a banquet of roast goose (die Martinsgans).

In former times, Martini was the “official” start of winter and the 40-day Christmas fast. Today Martinstag is the unofficial start of the Christmas shopping season in German Europe.

Just got from Lukie's school this morning to pick him up. Teacher phoned me cause my son had an upset stomach and threw up after eating the cake they had for San Martino day.

Looks like your MC and Ic had a great time!

the celebration looks fun, it's evdient on your kids. :)