The First Sunday of Advent 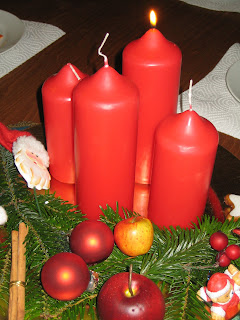 It has been a tradition that we light the first candle in our Advent's wreath during breakfast on the first Sunday of Advent.

This is to remember that Christmas is not only about giving gifts and having a party but also because Christ is born. And more importantly when the kids see this candle being lighted, they are always reminded that Christmas is not just waiting for their Advents calendar to be opened and their gifts to be presented but also, Christmas is for sharing.

That was why after breakfast, we headed off to opa's (grandpa) house to be mesmerized by his effort to create a festive atmosphere despite having to do it alone. He said, he tried to preserve oma's (grandma) memories by decorating according to her taste. We had to share this Sunday with him, too.

And I made that Advent wreath myself. I used the decors from the old wreaths to create a 'new' Advent wreath. I simply added fresh fir needles and new candles. 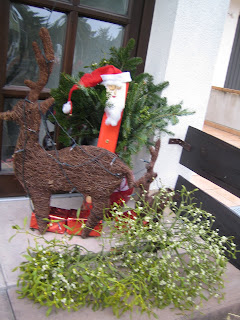 Wikipedia states that Advent is:

Advent (from the Latin word advenio, meaning "to come", "the coming of Christ our saviour") is a holy season of the Christian church, the period of expectant waiting and preparation for the celebration of the Nativity of Christ, also known outside the Church as the season of Christmas. It is the beginning of the Western Christian year and commences on Advent Sunday.
Posted by raqgold at 30.11.08

thanks for sharing sa adventzeit nyo.....

That's a wonderful tradition. We used to do that back in school. They also practice this tradition at Yohan's school.

I love those mistle twigs. :)