I came from the Philippines where November 1 is a big holiday for the whole family. The preparation would start a few days before with a visit to the cemeteries and memorial parks to clean the tombs.

And then, when Nov 1 comes, it would always be a time to reunite with family and friends. There would always be enough time to have a picnic, to chat and to be entertained. There would be even games for kids and some games for the adults, too. It would start from the wee hours of the morning to the early trek to the cemetery or the memorial parks and the late night goodbyes.

What do we bring? Candles, matches, flowers and of course, food and drinks! Plus, stories to tell.

MC even remembered my tale about celebrating Nov 1 at home. I told them my mother would have food in the altar and would light a candle for the dead. Sometimes we kids would eat the food on the altar and my mother would pretend not to know this and would always say that the souls came to eat the food. MC was asking me if I would be bringing some food so they would be able to eat them, too.

It was also a fun time to collect candle wax and a contest on who would have the biggest ball of wax. And would also be time to reconnect with old relatives and old friends. It is not just a holiday but a tradition. 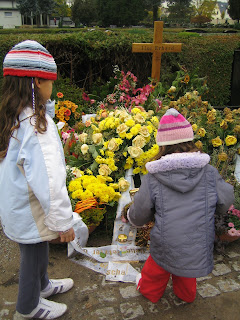 Keeping a Philippine tradition alive, visiting the cemetery on All Saint's Day

But here in Germany? Been here for almost 8 years now and I have never visited the cemetery on the same day. We do visit once in a while esp since it is just in front of the church where we regularly attend services; but the traditional visit such as what I was used to in the Philippines? That was definitely not.

Now that the oma's remains are there, I encouraged my husband and the kids to visit today. Actually, they were ready to go. The kids even drew something on the memorial candle that I brought. We didnt bring any flowers as we know oma's funeral flowers are still in bloom. Plus, the tradition here would be dried flowers. 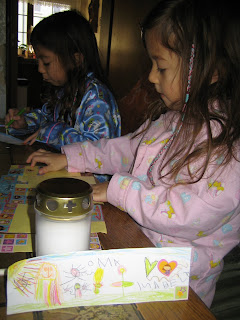 That was the memorial candle and beside it is IC's drawing which I pasted around it.

I hope to keep this tradition going. Because the dead also touched our lives in more ways than one.
----
PMN: Home and Garden is about making a doll house.
Posted by raqgold at 1.11.08