My girls are absolutely easy to please :-)

The noticed that they compared before, they don't have too many gifts under the Christmas tree. You see, Oma and Opa are not there anymore plus other things but let's not get into that.

But they don't care. The glee they showed in opening their Christmas presents are enough to let us know that they love their gifts.

I made the gifts a bit more exciting, more dramatic. You see, we just got a second-hand computer for the girls. My husband and I got it ready a day before Christmas Eve and decided to place it in the corner of our work area. From that day on, the girls are not allowed to enter that room. IC was a little nosy though...

On Christmas Eve, during the traditional Christmas stroll of the girls with their Papa; as the designated Christkind assistant, I made everything Christmas ready. I created a short note and placed a Santa hut and ribbons around the the monitor. I turned off the lights and placed candles in strategic places.

When they arrived, they were greeted by the candle lights (and the Christmas lights, of course) and I led them to their first 'Christmas gift' destination accompanied by the ringing of a Christmas bell. I could feel the excitement of the girls as I asked them to blow the candles everytime they pass one. 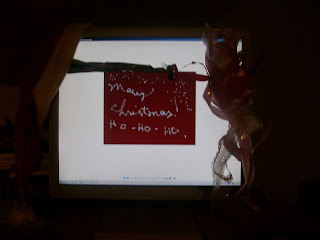 The girls love it!

Then we marched to the living room. Under the Christmas tree are gifts, too. We asked the girls to distribute the presents. They proceeded to give their gifts to Rikki first. Our dog showed her appreciation for the toys by running around with them. 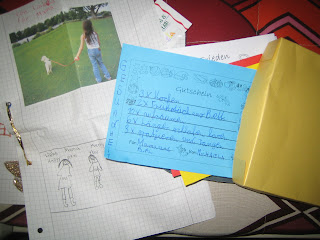 Then the girls presented their gifts to us. The best of which are some drawings and a box full of lists including promises to help in the household chores, for breakfast in bed, and to dance with :-)

After distributing the gifts for everyone, they started opening their own gifts. I was amazed by their patience and generosity because despite their excitement (IC's been asking me to call the Christkind to bring the gifts as early as 7 am!!!); they handed-out our presents first.

They loved their presents, as I have already said. I gave in and brought them Monster High dolls but I as I told them, I would never buy them those horrible accessories. It is now a few days after Christmas and they still rave over their gifts. 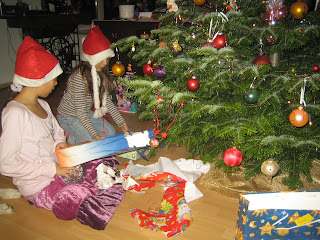 And this year, I never heard them asking for any handheld electronic gadgets at all. I guess that's  because they already know the rules (only if they could buy those gadgets with their own money) and because they are have re-discovered the magic of their digital cameras again. They were taking photographs and videos of their gifts almost daily.

P.S. IC actually discovered me with hands full of gifts when she came back to pick-up the forgotten treats for Rikki before their stroll. She grinned and left. I acted as if nothing was wrong. IC acted the same, even during the gift-giving. It turned out that after seeing me, she whispered to her Papa that she definitely knows who the Christkind is!!! She hasn't talked to me about it yet. But as I already declared, I am just the helper!
Posted by raqgold at 29.12.11